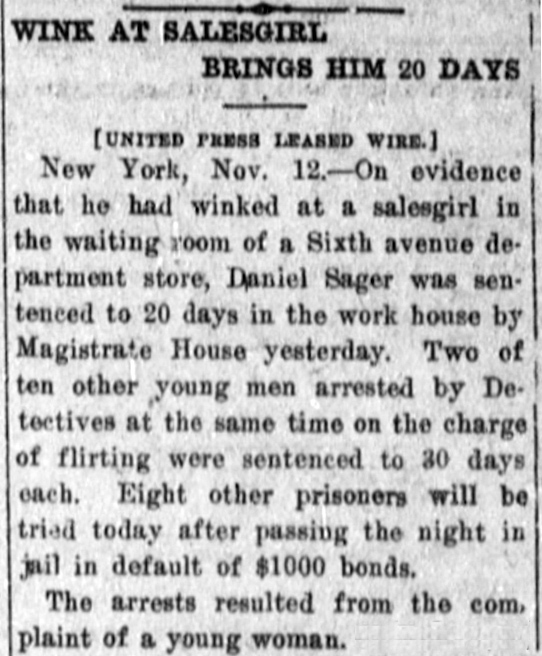 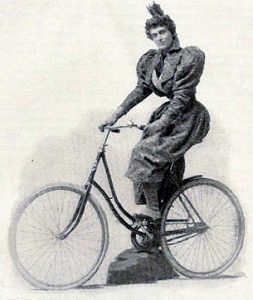 In June 1895 the Long Island Board of Education issued a stern directive to its female teachers: stop riding bicycles. A member of the board, William Sutter JP, explained this to the press:

“We as the trustees are responsible to the public for the conduct of the schools [and] the morals of the pupils. I consider that for our boys and girls to see their women teachers ride up to the school door every day and dismount from a bicycle is conducive to the creation of immoral thoughts…”

Another board member, Dr A. Reymer, added his support. Reymer suggested that if they continued to ride bicycles, women would eventually end up “wearing men’s trousers”. Long Island’s female teachers, many of whom relied on bicycles to get to and from school, were said to be “very indignant” about the order.

Source: The Sun (New York), June 15th 1895. Content on this page is © Alpha History 2016. Content may not be republished without our express permission. For more information please refer to our Terms of Use or contact Alpha History.

Alonzo Bertram See (1848-1941) was a prominent elevator manufacturer from New York City. Born in Yonkers, See started his own company in 1883 and began to ride the skyscraper boom to success and wealth.

By the turn of the century See was a millionaire several times over and his business – the quirkily named A. B. See Elevator Company – was the third-largest manufacturer and installer of elevators in the United States. New Yorkers rode in See’s elevators and so were familiar with his name – but knew little of him until the 1920s.

In 1922, Adelphi College, a Brooklyn women’s college started a fundraising drive and wrote to Mr See seeking donations. He responded in the negative, explaining his views bluntly:

“Of all the fool things in the world, I think colleges for women are the worst… College girls are slangy, they swagger, smoke cigarettes, have bold and brazen manners, paint and powder their faces, use lipsticks, wear high heeled shoes and dress indecently… When they graduate from college they cannot write a legible hand; they know nothing about the English language; they cannot spell… All women’s colleges ought to be burned.”

See’s letter found its way into the hands of the press. Coming shortly after the passing of the 19th amendment, guaranteeing voting rights for women, See’s views unleashed a flood of protest from women’s rights campaigners. As the New York Times put it, many women “hit the ceiling faster than they ever ascended in one of See’s elevators”. See, however, remained steadfast. When a prominent suffragette challenged him to a debate, See publicly declined, saying that:

“I never discuss anything logical with women. They can talk straight for about five minutes and then they go off the handle. They haven’t got the reasoning power a man has, and I wouldn’t think of debating with any woman on any subject.”

Apparently enjoying the notoriety, Alonzo See became something of a social critic. His two favourite targets were women and education, both of which he seemed to regard as a waste of time. When reformers sought legislation to outlaw child labour in 1924, See wrote agitated letters to the press, claiming that it was physically harmful to keep 13-year-old boys in school.

Two years later, See penned a lengthy essay on education, arguing that school causes some children to go blind and others to physically “waste away”. “Children must be rescued from their mothers and from pedagogues,” he wrote, and “women must be rescued from themselves”. The New York press published smirking references to See’s sexism for many years. In 1936, however, it was revealed that A. B. See had experienced an epiphany with regard to women and “changed his mind on them altogether”.

Source: Various inc. New York Tribune, November 24th 1922. Content on this page is © Alpha History 2016. Content may not be republished without our express permission. For more information please refer to our Terms of Use or contact Alpha History.

Samuel Gregory (1813-1872) was an American physician who specialised in several areas, including obstetrics and women’s health. Born and raised in Vermont, Gregory obtained a medical degree at Yale, graduating in 1840. Eight years later he founded the New England Female Medical College, the first medical school for women in the United States, if not the world.

Gregory was no champion of gender equality or women’s rights, however. He was essentially a prude who considered it highly inappropriate for male doctors to stand at the pointy end during childbirth. The business of delivering children and inspecting lady parts, Gregory argued, should be left to suitably trained women.

Gregory followed this with his list of ‘dos and don’ts’ for avoiding temptation – and it was a long list. Foods that “stimulate the animal propensities” should be avoided, including tea, coffee, candies, meat, chocolate, spices and alcoholic drinks. Certain behaviours in young girls also needed curtailing:

“Young persons should not be permitted to lie on [feather down] beds, nor to sit on soft chairs, to which rush or wooden-bottomed ones are greatly preferable. Neither should they be allowed to remain in bed longer than requisite, or to lie down needlessly on couches.”

Doctor Gregory also blamed literature and the creative arts, which had the capacity to stimulate unhealthy desires in young women:

“All books depicting exaggerated sentiments must be withheld… Even the study of the fine arts may render the imagination too active… Music, being the language of passion, is the most dangerous, especially music of the more impassioned and voluptuous nature… Fashionable music, especially the verses set to it, being mostly love sick songs, [are] all directly calculated to awaken these feelings.”

Source: Dr Samuel Gregory, Facts and Important Information for Young Women on the Self Indulgence of the Sexual Appetite, Boston: 1857. Content on this page is © Alpha History 2016. Content may not be republished without our express permission. For more information please refer to our Terms of Use or contact Alpha History.

1917: Mr Jones of Des Moines has patented his anti-masturbation overalls – they “curtail self-abuse in both sexes”.

Source: United States Patent US1215028, February 6th 1917. Content on this page is © Alpha History 2016. Content may not be republished without our express permission. For more information please refer to our Terms of Use or contact Alpha History.