In October 1852, Edward Horatio Girling, an employee of London Zoo, died after being bitten by a five-foot cobra. A post mortem on Girling’s corpse showed the cobra had bitten him five times on the nose. One of these bites had penetrated to the nasal bone and bled profusely.

Girling was rushed to hospital by cab, a journey that took 20 minutes. While in the cab his head swelled to “an enormous size” and his face turned black. In the hospital, Girling was given artificial respiration and electrical shocks. Neither was successful and he died 35 minutes after arrival.

A subsequent inquest investigated how Girling had come to be bitten in such a fashion. Early press reports put it down to a homicidal serpent. One suggested the cobra had bitten its victim him with “murderous intent”, another had it lunging from the shadows while Girling was delivering food to the enclosure.

It did not take long, however, for the inquest to learn that Girling was responsible for his own demise. One of Girling’s work colleagues, Edward Stewart the hummingbird keeper, testified at the inquest. He claimed to be passing by the snake enclosure with a basket of larks when he saw Girling inside. Apparently showing off, Girling picked up the ‘Bocco’, a mildly venomous colubrid snake, by its neck. According to Stewart:

“Girling then said ‘Now for the cobra!’ Deceased took the cobra out of the case and put it inside his waistcoat, it crawled round from the right side and came out at the left side… Girling drew it out and was holding the cobra between the head and middle of the body when it made a dart at his face.”

Unsurprisingly, the coroner found that Girling had died as a “result of his own rashness whilst in a state of intoxication”. The fate of the fatal cobra was not recorded for posterity.

Source: The Daily News, London, October 23rd 1852. Content on this page is © Alpha History 2016. This content may not be republished without our express permission. For more information please refer to our Terms of Use or contact Alpha History.

In 1980, a 21-year-old South Carolina man, Michael Anderson Sloan, was charged with the murder of Mary Elizabeth Royem, 24. Miss Royem’s body was found in her West Columbia apartment. She had been sexually assaulted and beaten to death with an electric iron. Sloan, who also used the name Michael Anderson Godwin, was on work release from a local prison. He was serving a sentence there for robbing a woman at knifepoint three years earlier.

Sloan went on trial for Royem’s murder in 1981. He was convicted of murder and sexual assault and sentenced to die in South Carolina’s electric chair. Sloan’s death sentence was commuted to life imprisonment in 1983 after a retrial cleared him of the sexual assault. As fate would have it, Sloan was still destined to die on an electric chair, albeit a different one:

“Convicted murderer Michael Anderson Godwin… has died after electrocuting himself, authorities said. Godwin was seated on a metal toilet and was apparently trying to repair earphones to a television set when he bit into the electrical cord, said State Corrections spokesman Francis Archibald.

‘It was a strange accident’, Archibald said. ‘He was sitting naked on a metal commode’… Richland County Coroner Frank Barron said Godwin was severely burned in his mouth and tongue. Barron said that an investigation is continuing but that it appears the electrocution was an accident.”

According to press reports, Sloan was a model prisoner who spent his final six years obtaining two college degrees in education. He had dreams of being released on parole and working with young people.

Source: Spartanburg Herald-Journal, March 7th 1989. Content on this page is © Alpha History 2016. Content may not be republished without our express permission. For more information please refer to our Terms of Use or contact Alpha History.

Clement L. Vallandigham (1820-71) was a prominent Ohio lawyer and politician who served in Congress prior to and during the Civil War. A pacifist by nature, Vallandigham made several inflammatory speeches against the war and those he deemed responsible for it, including Abraham Lincoln. In May 1863, Vallandigham was arrested and temporarily interned before being deported to the Confederacy. The following year he sneaked back into the United States via Canada with the aid of a new hairstyle and a false moustache.

After the war, Vallandigham returned to his native Ohio and resumed practising law. In June 1871, he was in the town of Lebanon, acting as lead defence counsel in a murder case. His client, a Hamilton ruffian named Thomas McGehan, was charged with shooting another man in the stomach during a barroom fight. Vallandigham’s line of defence was quite simple: the victim had, in fact, shot himself while trying to withdraw his pistol while rising to stand.

At breakfast one morning, Vallandigham showed his legal team how he intended to demonstrate this in court – but in doing so made a fatal error:

“Mr McBurney [another lawyer] had expressed some doubts as to the possibility of Myers [the victim] shooting himself in the manner described by Mr Vallandigham, when the latter said ‘I will show you in a half a second’. He picked up a revolver and putting it in his right pocket, drew it out far enough to keep the muzzle touching his body, and engaged the hammer. The weapon exploded and sent its deadly missile into the abdomen at a point almost corresponding with that in which Myers was shot. Mr Vallandigham immediately exclaimed that he had taken up the wrong pistol… There were two revolvers on the table, one loaded and the other unloaded. Unfortunately Mr Vallandigham seized the former.”

Vallandigham was carried to bed and doctors were summoned but they were unable to locate the bullet or stem his internal bleeding. He died some 12 hours later.

Vallandigham’s corpse was packed in ice and returned to his home in Dayton for burial. His wife, Louisa, who was attending her brother’s funeral at the time of her husband’s demise, was grief-stricken and died from a heart attack seven weeks later. Vallandigham’s client, Thomas McGehan, was retried twice and eventually acquitted.

Source: The Stark County Democrat (Ohio), June 22nd 1871. Content on this page is © Alpha History 2016. Content may not be republished without our express permission. For more information please refer to our Terms of Use or contact Alpha History. 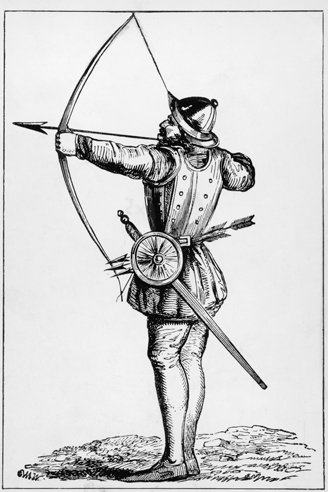 Coronial records from the 16th century describe the death of Henry Pert, a gentleman from Welbeck, near Worksop, Nottinghamshire. Pert died a day after receiving an arrow to the head. The arrow had been fired from his own weapon.

According to the coroner’s finding, Pert was stood over his loaded longbow while attempting to release a jammed arrow:

In 1906, a cheese-eating contest in Johnsburg, around 40 miles north-west of Chicago, proved fatal. The victim, Frank Miller, was 21 years old. His two friends were critically ill for several weeks but ultimately survived:

Source: The Minneapolis Journal, October 4th 1906. Content on this page is © Alpha History 2016. Content may not be republished without our express permission. For more information please refer to our Terms of Use or contact Alpha History.