In 1691, Joseph de Arostegui of Calahorra, in northern Spain, petitioned for divorce from his wife, Antonia Garrido, based on her alleged impotence. According to Joseph’s testimony, there had been no consummation of their four-year marriage because his wife “does not have her parts like other women”.

Antonia contested her husband’s claim for divorce, her lawyer asserting that Antonia’s genitals were fully functional but had been affected by “evil spells and witchcraft”. As was usual in early modern trials where impotence was alleged, Antonia was ordered to submit to at least two examinations by doctors and midwives.

At the second of these examinations:

The examiners, content that penetration had been achieved, ruled that Antonia was capable of intercourse, and the church court turned down Joseph’s petition for divorce. The fate of their marriage after this is unknown.

Source: Testimony of Dr Juan Munoz, Archives of the Diocese of Calahorra, folio 1. Content on this page is © Alpha History 2016. Content may not be republished without our express permission. For more information please refer to our Terms of Use or contact Alpha History.

1917: A husband may spank his wife if she smokes cigarettes, a New Jersey judge has ruled. 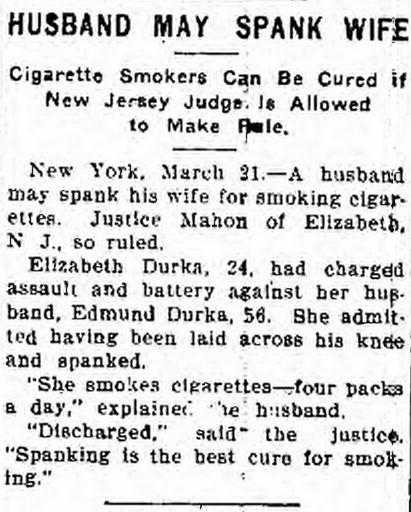 Source: The Washington Times, March 20th 1917. Content on this page is © Alpha History 2016. Content may not be republished without our express permission. For more information please refer to our Terms of Use or contact Alpha History.

In 1598, a Hounsditch woman named Margaret Browne appeared at Bridewell Court to give evidence against her neighbour. Browne and her husband lived next door to John Underhill, a local bookbinder, and his wife Clement. According to Browne’s testimony, Mr Underhill left town on business on May 13th. Around lunchtime, Clement Underhill received a male caller, a man named Michael Fludd. Mrs Browne, apparently a pioneer of the Neighbourhood Watch movement, followed events through windows and gaps in the walls. She saw and overheard a salacious exchange in the Underhills’ kitchen:

“As they were eating their victuals, Underhill’s wife said unto Fludd these words: “Eat no more cheese, for that it will make your gear short, and I mean to have a good turn of you soon.”

After lunch, Fludd retired upstairs to the Underhills’ bedroom, where he remained while Mrs Underhill attended their store. At six o’clock she joined him in the bedchamber, where Fludd:

“…took her in his arms and brought her to the bed’s foot and took up her clothes… She put her hand into his hose and he kissed her and pulled her upon him… He plucked up her clothes to her thighs, she plucked them up higher, whereby [Mrs Browne] saw not only her hose, being seawater green colour, and also her bare thighs.”

After nature had taken its course, Fludd “wiped his yard on her smock”, then Underhill “departed from him to fetch a pot of beer”. They then shared some bread and drink, with Mrs Underhill reportedly toasting Fludd’s performance in bed. Browne’s husband, who arrived home in time to witness the fornication next door, supported his wife’s testimony.

Confronted with this evidence, Fludd confessed to having “carnal knowledge of the body of the said Clement Underhill”. Despite the graphic nature of Mrs Browne’s testimony Fludd was treated leniently: he was ordered to pay 20 shillings to the Bridewell hospital. Mrs Underhill was not arraigned and escaped without penalty from the court, though she did not escape public humiliation.

Source: Bridewell Court Minute Book 1598-1604, May 1598, f.23. Content on this page is © Alpha History 2016. Content may not be republished without our express permission. For more information please refer to our Terms of Use or contact Alpha History.

Charles Godfrey Leland (1824-1903) was an American journalist and folklorist who spent much of his life travelling and investigating different cultures, both ancient and modern.

In the early 1890s, Leland spent time in Italy where he visited Roman and Etruscan ruins and researched remnant cultural practices. While in Tuscany Leland uncovered a spell for marital fidelity, apparently recorded by Marcellus Burdigalensis, a physician to Emperor Honorius:

“When a man wishes his wife to be faithful, he should take his sperm, sprinkled, and put it in a bottle… then catch a lizard with the left hand and put it in the same bottle. Cork them up very tightly and say:

(Here I put the fidelity of my wife, that she may be ever and ever true to me.)

Be careful not to lose the bottle; you should always keep it in the house.”

Source: Cited in Charles G. Leland, Etruscan Roman Remains, 1892. Content on this page is © Alpha History 2016. Content may not be republished without our express permission. For more information please refer to our Terms of Use or contact Alpha History.

Bill Gates, popularly known as ‘Swiftwater Bill’, was an Idaho-born pioneer and miner. Around 1896, Gates left his job as a dishwasher and joined the Klondike gold rush in remote western Canada. Gates purchased a claim along the Yukon River and chanced upon one of the richest deposits in the Klondike. For a while Gates was reportedly cashing in more than $10,000 of gold each week, making him one of the Yukon’s most successful prospectors.

Gates also spent money as fast as he made it. He was a notorious spendthrift, fond of fancy clothes, high living and gambling. He was also a ladies’ man – and in the goldfields, this often proved an expensive hobby:

“As a matrimonial market, Dawson City [in the Yukon] has no equal on earth. Ladies are as scarce as gold dust… Any maiden, innocent or full of guile, can become a bride with a wedding present of thousands of dollars of gold dust within 30 minutes after arriving at Dawson City if she will but whisper her consent.”

Bill Gates was particularly infatuated with the teenage girls employed as dancers and waitresses in Dawson. According to legend one of Gates’ favourite dancers was fond of eggs – a scarce commodity in the Yukon – so he bought up every egg in Dawson at a dollar apiece. The main object of Gates’ affection was 19-year-old Gussie Lamore. In 1897 he tried securing her hand in marriage by giving Gussie her own weight in gold:

“…Bill was so smitten with her charms that he called on Miss LaMore the day of her arrival and wooed her with $50,000 of gold dust in a coal oil can.”

Bill and Gussie never married (some reports suggest she already had a husband). Gates continued to chase teenage girls, including Gussie’s younger sister Grace, Bera Beebe (whom he eventually married) and 17-year-old Kitty Brandon. His antics later led to a bigamy charge, though Gates managed to avoid trial, possibly with bribes.

In his lifetime, Bill Gate dug up and squandered at least four different fortunes. He was mining a large silver deposit in Peru when he died in 1935.

Source; The San Francisco Call, August 26th 1897. Content on this page is © Alpha History 2016. Content may not be republished without our express permission. For more information please refer to our Terms of Use or contact Alpha History.