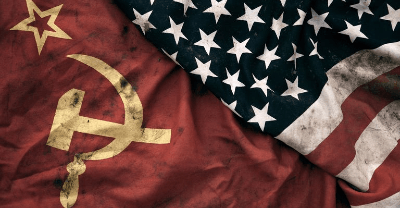 The Cold War was a long period of international tension, unfolding in 1945 and lasting until 1991. It was marked by intense rivalry and occasional confrontation between the United States, the Soviet Union and their allies.

The phrase ‘cold war’ was coined by writer George Orwell, who in October 1945 predicted a period of “horrible stability” where powerful nations or alliance blocs, each capable of destroying the other, refuse to communicate or negotiate.

Orwell’s dire prediction began to manifest in 1945. As Europe was liberated from Nazi tyranny, it was occupied by the Soviet Red Army in the east and the Americans and British in the west. At conferences to chart the future of post-war Europe, tensions emerged between Soviet leader Joseph Stalin and his American and British counterparts.

By mid-1945, hopes of post-war cooperation between the Soviet Union and Western nations had been dashed. In eastern Europe, Soviet agents pushed socialist parties into power, prompting British politician Winston Churchill to warn of an “Iron Curtain” descending on Europe. The United States responded by implementing the Marshall Plan, a four-year $13 billion aid package to restore European governments and economies. By the late 1940s, Soviet intervention and Western aid had split Europe into two blocs.

At the epicentre of this division was post-war Germany, now cleaved into two halves and its capital city Berlin occupied by four different powers.

In 1948, Soviet and East German attempts to starve the Western powers out of Berlin were thwarted by the largest airlift in history. In 1961 the government of East Germany, facing a mass exodus of its own people, locked down its borders and erected an internal barrier in the divided city of Berlin. The Berlin Wall, as it was known, became an enduring symbol of the Cold War.

Cold War tensions also spread beyond the borders of Europe. In October 1949, the Chinese Revolution came to a conclusion with the victory of Mao Zedong and the Chinese Communist Party. China quickly industrialised and became a nuclear power, while the threat of communism moved Cold War attentions on to Asia. In 1962, the discovery of Soviet missiles on the island nation of Cuba pushed the United States and the Soviet Union to the brink of nuclear war.

These events fuelled an unprecedented level of suspicion, mistrust, paranoia and secrecy. Agencies like the Central Intelligence Agency (CIA) and Komitet Gosudarstvennoy Bezopasnosti (KGB) increased their covert activities around the world, gathering information about enemy states and regimes. They also interfered in the politics of other nations, encouraging and supplying underground movements, uprisings, coup d’etats and proxy wars.

Ordinary people experienced the Cold War in real time, through one of the most intensive propaganda campaigns in human history. Cold War values and nuclear paranoia permeated all aspects of popular culture, including film, television and music.

Alpha History’s Cold War website is a comprehensive textbook quality resource for studying the political and military tensions between 1945 and 1991. It contains almost 400 different primary and secondary sources, including detailed topic summaries, documents, timelines, glossaries and biographies. Advanced students can find information on Cold War historiography and historians. Students can also test their knowledge and recall with a range of online activities, including quizzes, crosswords and wordsearches. Primary sources aside, all content at Alpha History is written by qualified and experienced teachers, authors and historians.