In 1625, two English military commanders (George Villiers, Duke of Buckingham and Sir Edward Cecil) sought royal approval for a war against Spain. A successful campaign, they told Charles I, would weaken the Spanish Empire and revive the glory of 1588 when the English repelled the Armada. Villiers and Cecil also hoped to line their pockets by plundering Spanish ships returning from the Americas laden with cash and cargo.

Their plan was backed by Charles I but not parliament, which was unwilling and probably unable to provide financial support. In the summer of 1625, Cecil moved to Devon to assemble his invasion force but he was plagued by a shortage of funds and other difficulties. He secured almost 120 English and Dutch ships but many were poorly maintained. Cecil’s land force consisted of 15,000 men, most of whom were pressed into service in and around Plymouth. Cecil’s expedition was also poorly stocked: he was able to obtain provisions for scarcely a fortnight abroad.

The fleet sailed on October 5th 1625 but returned the following day after striking bad weather. It sailed again two days later but suffered damage in heavy weather off the Spanish coast. The English encountered several Spanish ships filled with cargo but dithering allowed them to escape.

The expedition landed near Cadiz on October 24th but Cecil, having noticed the city’s fortifications, abandoned his plans to attack it. Instead, Cecil marched his men in the opposite direction. With night approaching, he allowed his invasion to stop at a village in the wine-producing region of Andalusia. Unfortunately for Cecil, this village housed quite a large quantity of the local product. His ‘army’ quickly fell apart, thanks to:

“…the misgovernment of the soldiers who, by the avarice or negligence of their commanders, were permitted to fill themselves so much with the wine they found in the cellars and other places they plundered, that they became more like beasts than men… if the Spaniards had had good intelligence they might have all been cut off.”

Cecil’s men were so hopelessly drunk that their officers abandoned plans for capturing major cities – or indeed smaller ones. The soldiers were herded back onto the ships. For a time they sailed aimlessly along the Spanish coast, looking for treasure ships to plunder. But poor hygiene and lack of supplies soon took their toll on the men, who began to die, “many each hour”.

In mid-November, the expedition was abandoned and the English ships, scattered at sea, began to limp back to their home ports. Cecil was the last to return: his own ship was blown off course and became lost, landing on the south coast of Ireland in mid-December. His return ended one of the most ambitious but worst executed military campaigns in English history.

Source: Sir Richard Baker, A Chronicle of the Kings of England &c., 1684. Content on this page is © Alpha History 2016. Content may not be republished without our express permission. For more information please refer to our Terms of Use or contact Alpha History.

Johnson was elected to the House of Representatives in 1937, weeks before his 29th birthday. When Pearl Harbour was bombed in December 1941 Johnson rushed to enlist in the Naval Reserve, probably thinking that military service would enhance his political prospects. In mid-1942, Johnson, by then sporting the rank of lieutenant-commander, travelled to the Pacific theatre as an observer. He became friendly with Douglas MacArthur, who allowed Johnson to ‘sit in’ on an aerial bombing raid against Japanese targets.

On June 9th, Johnson arrived at an airstrip in Port Moresby and boarded a B26 Marauder dubbed the Wabash Cannonball. Needing to “take a leak”, Johnson left the aircraft for a few minutes. On his return he found the seats occupied by other officers, forcing LBJ onto another B26, the Heckling Hare. As it turns out Johnson’s full bladder saved his life: the Wabash Cannonball was shot down over water near Lae, killing all on board.

Johnson’s plane also came under attack from numerous Japanese Zeros and was forced to abandon its bombing mission. While the pilot, Lieutenant Walter Greer, struggled to evade the Zeros, and the aircrew manned the guns, Johnson watched the whole show from his window seat. The attack lasted less than 13 minutes before the Heckling Hare slipped its pursuers and headed back to Moresby on one engine.

Despite playing no active part in the mission, Johnson was awarded the Silver Star, apparently for showing “coolness”:

“While on a mission of obtaining information in the Southwest Pacific area, Lieutenant Commander Johnson, in order to obtain personal knowledge of combat conditions, volunteered as an observer on a hazardous aerial combat mission over hostile positions in New Guinea. As our planes neared the target area they were intercepted by eight hostile fighters… The plane in which Lieutenant Commander Johnson was an observer developed mechanical trouble and was forced to turn back alone, presenting a favourable target to the enemy fighters, [and] he evidenced marked coolness in spite of the hazards involved.”

The Heckling Hare’s other crew members – including Lieutenant Greer, whose brilliant flying had saved Johnson’s life – were awarded no medal of any kind. Greer was not even aware of Johnson’s Silver Star until reading of it in the press. The men who died on the first B26, the Wabash Cannonball, received only the lower-rated Purple Heart.

As for Johnson, he showed some initial embarrassment about his Silver Star, telling a Washington reporter he didn’t deserve the medal. He claimed to have drafted a declining the medal – but he eventually accepted and wore it. When Johnson returned to the campaign trail in Texas his Silver Star, arguably the least-deserved military decoration in American history, became one of the most worn and referenced. Johnson continued to wear the Silver Star citation in the Senate, as vice-president and during his tenure in the White House.

Source: Silver Star citation, General Orders No. 12, Southwest Pacific Area, June 18th 1942. Content on this page is © Alpha History 2016. Content may not be republished without our express permission. For more information please refer to our Terms of Use or contact Alpha History.

During the rising nationalism of the 1800s, many came to see Fraktur as the ‘more German’ of the two typefaces and pressured the government and printers to use it more. Otto von Bismarck refused to read books in ‘un-German fonts’ and Kaiser Wilhelm II also disliked them. When the Nazis emerged in the early 1920s, they also opted for Fraktur and its derivatives. The cover of Hitler’s 1924 memoir Mein Kampf used a hand-drawn Fraktur font. Official Nazi documents and letterheads also employed it.

This continued until January 1941, which produced a remarkable shift in attitudes. In an edict signed by Martin Bormann, the Nazis called for a ban on the future use of Judenlettern (‘Jewish fonts’) like Fraktur:

I announce the following, by order of the Führer:

“It is false to regard the so-called Gothic typeface as a German typeface. In reality, the so-called Gothic typeface consists of Schwabacher-Jewish letters. Just as they later came to own the newspapers, the Jews living in Germany also owned the printing presses… and thus came about the common use in Germany of Schwabacher-Jewish letters.

Today the Führer… decided that Antiqua type is to be regarded as the standard typeface. Over time, all printed matter should be converted to this standard typeface. This will occur as soon as possible in regard to school textbooks, only the standard script will be taught in village and primary schools. The use of Schwabacher-Jewish letters by authorities will in future cease. Certificates of appointment for officials, street signs and the like will in future only be produced in standard lettering…”

Ironically, Bormann’s memo went out under the Nazi Party letterhead – which was itself printed in a Fraktur font. The reason for the Nazi turnaround on typefaces has never been definitively explained. One theory is that Hitler had a personal dislike of more ornate fonts like Fraktur. His increased reading workload in 1939-40 may have tripped the Führer’s fuse and prompted the ban on these so-called ‘Jewish fonts’.

Source: NSDAP memo on Judenlettern, signed by Martin Bormann, January 3rd 1941. Content on this page is © Alpha History 2016. Content may not be republished without our express permission. For more information please refer to our Terms of Use or contact Alpha History. 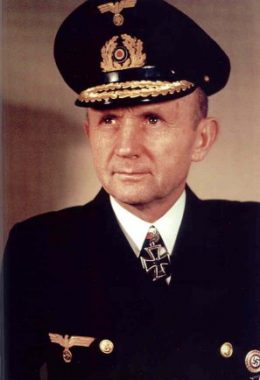 Karl Dönitz was a German admiral during World War II and, for a brief time after Hitler’s suicide, the president of Germany. Dönitz served as a junior lieutenant in World War I, remaining in the Navy during the interwar period and rising through the ranks. At the outbreak of World War II, Dönitz was promoted to rear admiral and put in charge of Germany’s U-boat fleet. Though not a Nazi Party member, he was pro-Nazi, anti-Semitic and fanatically loyal to Hitler.

Dönitz became Reich president on April 30th 1945 and oversaw Germany’s surrender to the Allies, before his arrest three weeks later. According to an apocryphal story, Dönitz, who suffered from poor bladder control, was wearing several pairs of underpants when arrested. He was held by the British for several weeks, then charged with war crimes and moved to Nuremberg.

While awaiting trial, Dönitz admitted to a US Army psychiatrist Lieutenant-Colonel Douglas Kelley that he had feigned insanity while in British custody:

“Two companions and I decided it might aid our efforts to escape if we were adjudged insane. We walked about, our heads hunched down, going ‘Bzzz, bzzz’ and insisting that we were U-boats. But the British doctors were too much smart for us.”

Dönitz was convicted of military war crimes but acquitted of the more serious crimes against humanity. Sentenced to 10 years’ imprisonment, he was held at Spandau until 1956. After his release Dönitz retired to northern Germany where he penned two memoirs and remained unapologetic for his role in the war. He died in 1980, aged 89.

Source: Douglas M. Kelley, Twenty-two Cells in Nuremberg: A Psychiatrist examines the Nazi criminals, 1947. Content on this page is © Alpha History 2016. Content may not be republished without our express permission. For more information please refer to our Terms of Use or contact Alpha History.

Frederick I (1122-90) was a skilled military commander, cunning political strategist and charismatic leader. Known as “Barbarossa” because of his red beard, Frederick ruled as Duke of Swabia (1147), king of the German territories (1152) and Holy Roman Emperor (1155).

In the late 1150s, Frederick marched his army to northern Italy to suppress recalcitrant cities in Lombardy. During this campaign, Frederick left his wife, Beatrice, in Milan. The Milanese treated her poorly, however, seizing Beatrice, placing her backwards on a mule and forcing her to ride out of the city.

Frederick was outraged by this gross insult but did not have to wait long for his revenge. In March 1162, his forces laid siege to Milan and the city quickly capitulated. According to chroniclers like Giambattista Gelli, repeated here by Nathaniel Wanley, Frederick got his own back for the mule incident – and then some:

“The Emperor, justly incensed, urged the besieged [citizens] to yield, which they at last did… he received them with mercy upon this condition: that every person who desired to live should, with their teeth, take a fig out of the genitals of a [she] mule.”

According to two accounts, this bizarre ritual was carried out in Milan’s largest square. A few Milanese refused to participate in it and were duly beheaded – but most submitted. Frederick remained true to his word, sparing their lives, however for decades the incident was used to humiliate and insult the Milanese. The fig sign – an insulting medieval hand gesture – may well emanate from this event.

Source: Nathaniel Wanley, The Wonders of the Little World, or a General History of Man, 1678. Content on this page is © Alpha History 2016. Content may not be republished without our express permission. For more information please refer to our Terms of Use or contact Alpha History.