John Macdonald was a servant to several 18th-century noblemen and colonial officials. According to his writings, Macdonald was the son of an affluent tenant farmer from Inverness. When his family was “ruined” in the 1740s Macdonald, then just a young boy, was placed in service. He became a footman and valet and later spent more than 30 years travelling the globe with a succession of masters.

Better educated and more literate than his colleagues, Macdonald penned a memoir that contains rare glimpses of life as a working-class tourist abroad. It also describes racier aspects of foreign life, like this fertility ritual in western India:

“At Dillinagogue there was a tank where the Gentoos [Hindus] bathe themselves and the women in particular. At the end of the tank is a piece of rising ground with a cross fixed 12 feet high, where a priest sits most days, naked as he was born. When the women come to enter the bath they make the priest a grand salaam [greeting]. They have a shift on when they entered the water. When a young girl who has been betrothed for some years is going home to her husband… goes to take the bath, she makes a grand salaam to the priest and kisses his private parts, hoping he will pray that they may have children. I took a great delight in going to see those ceremonies.”

Source: John Macdonald, Travels in Various Parts of Europe, Asia and Africa &c., 1790. Content on this page is © Alpha History 2016. Content may not be republished without our express permission. For more information please refer to our Terms of Use or contact Alpha History.

In 1617, Somerset magistrates heard several charges against William Zane, a horse-breaker from the village of Long Sutton, near Somerton. Zane had committed a series of public indecencies involving women and young girls. The worst of these was the seduction of Ann West, with whom he had fornicated after promising had marriage. He later collected a ten-pound dowry from her parents.

According to testimony, their affair was revealed when Zane arrived at the West home and:

“…called for Ann West, she being then at the street door, and because she came not presently unto him, he came forth to her and pulled her into the chamber by the arm, then having his private members showing out of his breeches.”

However, this was not the first time Zane had been free with his genital revelations. Several weeks earlier he:

“…came into the house of William Parsons, being one of his neighbours, finding the wife of William sitting at her work, drawed out his private member and laid it upon her shoulder and wished aloud that her shoulder was another thing…”

On another occasion, Zane thrust his hand under the skirts of a young girl, making her cry. When the girl’s mother confronted Zane in public and dressed him down, he responded by sneaking into her yard and soiling her clean washing with “filthy ordure and dung of people”.

The magistrates found Zane guilty and sentenced him to a series of public whippings. He was also ordered to repay the ten pounds to Ann West’s parents and to pay two shillings a week for the upkeep of her child. Ann West was also sentenced to a whipping for premarital fornication.

Source: Somerset Quarter Session Rolls, n.27, 1617. Content on this page is © Alpha History 2016. Content may not be republished without our express permission. For more information please refer to our Terms of Use or contact Alpha History.

In August 1921, police in Long Beach, New York cracked down on people driving about in bare knees. Captain Walter Barruscale told a local newspaper that his officers had issued several fines, ranging in amounts of $10 to $25, to motorists entering Long Beach with their knees exposed:

“‘Long Beach will not countenance people coming here in automobiles and wearing bathing costumes, or without their limbs being properly covered below the knees’, Capt. Barruscale said.”

Barrascule said that the same rules applied to those who “go about the streets… bare knees must be confined within walls or restricted to the bathing beaches”. Signs have been erected on roads into Long Beach, warning motorists of the restrictions and possible penalties.

Source: The Evening World, New York, August 22nd 1921. Content on this page is © Alpha History 2016. Content may not be republished without our express permission. For more information please refer to our Terms of Use or contact Alpha History.

In 1620, a farmer named Cutte from the village of Halse, near Taunton, appeared before a Somerset magistrate. Cutte was charged with gross indecency towards his unnamed wife. The alleged offence was committed at a village gathering where several people, including the defendant, were drunk.

According to witnesses, Cutte:

“…made an offer to diverse [people] then present, that for a penny a piece they should see his wife’s privities… and there withal he did take her and throw her upon a board and did take up her clothes and showed her nakedness in [the] most beastly and uncivil manner.”

Cutte’s behaviour apparently shocked those present, who called a halt to his enterprise by blowing out the candles and casting the room into darkness. The court found Cutte guilty and admonished him but no punishment was recorded.

Source: Session Rolls of the Somerset Quarter Sessions, 1620, f.36. Content on this page is © Alpha History 2016. Content may not be republished without our express permission. For more information please refer to our Terms of Use or contact Alpha History. 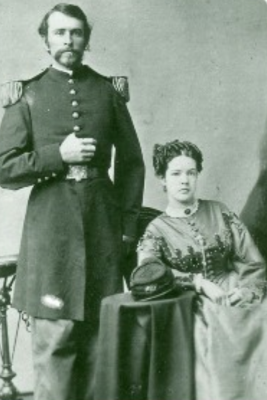 Frank D. Baldwin served in the United States Army for more than 40 years, enlisting as a teenaged private in 1862 and retiring as a major-general in 1906. During his service, Baldwin fought with distinction in the US Civil War, several campaigns against Native American leaders Crazy Horse and Sitting Bull, and the Spanish-American War. He became one of only 19 Americans to win the prestigious Medal of Honor twice.

Michigan-born Baldwin married Alice Blackwood in January 1867. For the next few years, husband and wife (photograph above) were frequently separated by Frank’s military postings so corresponded regularly by mail. Alice’s letters suggest she was a devoted wife who adored her husband, as well as a woman of good humour. Writing in October 1870, Alice informed Frank of an incident during a train trip through Illinois:

“There was a man showed his conflumux [penis] to me at one station where we stopped… while I was looking out the window. I thought he might have saved himself the trouble because I had seen one before…”

Alice’s letters occasionally contained sexual commentary or titillation. In one note from June 1873 she playfully chastises Frank for “casting sly glances at Mrs Sowter’s bubbies. You ought to be ashamed.” She also teases him by writing:

“How are you this hot day? I am most roasted and my chemise sticks to me and the sweat runs down my legs and I suppose I smell very sweet, don’t you wish you could be around just now?”

In another letter, from December 1870, Alice taunts her husband about his prior intentions to marry another woman, Nellie Smith. According to Alice, Frank’s alternative wife might have suffered from his generous endowment:

“I felt real queer and strange when I heard you had half a mind to marry another girl. I thought I held undivided your love. Well, it’s too late now. Nellie Smith don’t know what she escaped. She would have been killed at one nab of your old Long Tom.”

Frank Baldwin died in 1923, aged 80. Alice died in 1930 after securing the publication of her late husband’s memoirs.

Source: Letters from Alice Baldwin to Frank Baldwin dated September 5th 1869; October 1st 1870; June 22nd 1873. Content on this page is © Alpha History 2016. Content may not be republished without our express permission. For more information please refer to our Terms of Use or contact Alpha History.