In 1637, an order from Charles I required members of the Norwich municipal corporation to attend cathedral services, if they weren’t already. The order posed problems for the mayor and aldermen, who petitioned the king for an exemption from attending services in the city’s cathedral. Their “Humble Petition” cited “inconveniences thereof [that were] many and intolerable”.

According to members of the corporation, their low seats in the cathedral were subject to gusts of freezing wind. Not only that, the ordinary folk of Norwich, already none too fond of the corporation, occupied the seats in the upper galleries. This gave them an ideal vantage point for pelting city officials with anything they could find, from shoes to excreta:

“There be many seats over our heads and are oftentimes exposed to much danger… In the mayoralty of Mr Christopher Barrett a great Bible was let fall from above and hitting him upon the head, broke his spectacles… Some made water in the gallery on the aldermen’s heads and it dropped down into their wives’ seats… In October last Alderman Shipdham, somebody most beastly did conspurcate and shit upon his gown from the galleries above… some from the galleries let fall a shoe which narrowly missed the mayor’s head… another time one from the gallery did spit upon Alderman Barrett’s head…”

The king denied their request for exemption. It is not known if the Norwich elders followed the order and braved the masses in the cathedral.

Source: Tanner manuscripts, Bodleian Library; v.220, f.147. Content on this page is © Alpha History 2016. Content may not be republished without our express permission. For more information please refer to our Terms of Use or contact Alpha History. 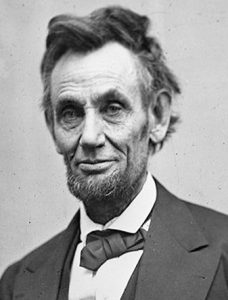 Barely literate internet trolls may seem a recent phenomenon but only the medium is new. Ask Abraham Lincoln, 16th president of the United States.

As can be imagined, Abe was less than popular with his constituents in the southern states. An expression of the president’s unpopularity can be found in this barely legible item of hate mail, sent to Lincoln by a Mr A G Frick in February 1861. Frick’s spelling, grammar and punctuation appear as originally written:

[PS] Tennessee Missouri Kentucky Virginia N. Carolina and Arkansas is going to secede Glory be to god on high”

Source: Letter dated February 14th 1861, cited in Dear Mr Lincoln: Letters to the President, Harold Holzer (ed.), 1993. Content on this page is © Alpha History 2016. Content may not be republished without our express permission. For more information please refer to our Terms of Use or contact Alpha History.

On the day when the people of Scotland vote on independence from Britain, some might like to reflect on a piece of literature from the mid 17th century.

A Perfect Description of the People and Country of Scotland was first published in London in 1649 and reappeared in various forms over the next decade. Its authorship is open to question. Some historians attribute it to Oxford graduate and minor writer James Howell, better known for coining the phrase “All work and no play makes Jack a dull boy”. Others believe it was written by Anthony Weldon, a scheming courtier to Charles I.

Whoever was responsible for its creation, A Perfect Description is unabashed propaganda, filled with anti-Scottish jibes and stereotypes. The people of Scotland, it claims, are lazy and incompetent farmers; they would “rather go to taverns” than cultivate the land around them. They are also coarse and uncultured and will “stop their ears if you speak of a play”. They fornicate as a “pastime”, laugh at blasphemy and wink at murder.

The writer reserves particular acrimony for Scottish women, of whom it claims “there are none greater [fatter] in the whole world”. Further, they have appalling personal hygiene and make terrible wives:

“Their flesh abhors cleanliness, their breath commonly stinks of pottage, their linen of piss, their hands of pigs’ turds, their body of sweat [while] their splay feet never offend socks. To be chained in marriage with one of them [is] to be tied to a dead carcass and cast into a stinking ditch.”

Source: Source: Author unknown, A Perfect Description of the People and Country of Scotland, 1649. Content on this page is © Alpha History 2016. Content may not be republished without our express permission. For more information please refer to our Terms of Use or contact Alpha History.

Frederick I (1122-90) was a skilled military commander, cunning political strategist and charismatic leader. Known as “Barbarossa” because of his red beard, Frederick ruled as Duke of Swabia (1147), king of the German territories (1152) and Holy Roman Emperor (1155).

In the late 1150s, Frederick marched his army to northern Italy to suppress recalcitrant cities in Lombardy. During this campaign, Frederick left his wife, Beatrice, in Milan. The Milanese treated her poorly, however, seizing Beatrice, placing her backwards on a mule and forcing her to ride out of the city.

Frederick was outraged by this gross insult but did not have to wait long for his revenge. In March 1162, his forces laid siege to Milan and the city quickly capitulated. According to chroniclers like Giambattista Gelli, repeated here by Nathaniel Wanley, Frederick got his own back for the mule incident – and then some:

“The Emperor, justly incensed, urged the besieged [citizens] to yield, which they at last did… he received them with mercy upon this condition: that every person who desired to live should, with their teeth, take a fig out of the genitals of a [she] mule.”

According to two accounts, this bizarre ritual was carried out in Milan’s largest square. A few Milanese refused to participate in it and were duly beheaded – but most submitted. Frederick remained true to his word, sparing their lives, however for decades the incident was used to humiliate and insult the Milanese. The fig sign – an insulting medieval hand gesture – may well emanate from this event.

Source: Nathaniel Wanley, The Wonders of the Little World, or a General History of Man, 1678. Content on this page is © Alpha History 2016. Content may not be republished without our express permission. For more information please refer to our Terms of Use or contact Alpha History.

Captain Benjamin Beilby, a British army officer with the 11th Foot Regiment on Minorca, was court-martialed in September 1766. Beilby’s ‘crime’ was that he had been abused and insulted by another officer, Captain Robinson, but had done nothing about it. As a consequence Beilby was charged with:

“…having received from Captain Robinson language unbecoming of the character of an officer and a gentleman, without taking proper notice of it.”

According to witnesses Robinson had been taunting and abusing Beilby for some time, on one occasion being heard to call out:

Beilby’s willingness to tolerate these grievous slurs outraged his fellow officers, perhaps more than the slurs themselves. Honour demanded that the insulted party confront Robinson and challenge him to a duel – but Beilby did nothing other than to write his abuser an angry letter.

Beilby was ostracised by his own colleagues, who refused to dine in the same mess as him. The court-martial found Beilby guilty of neglect and he was suspended from duty for one year. When records of the court-martial reached the Admiralty in London, however, it was immediately overturned. Captain Robinson was not court-martialed or sanctioned for his insults.

Source: Court Martial Records, 71/50, September 1766. Content on this page is © Alpha History 2016. Content may not be republished without our express permission. For more information please refer to our Terms of Use or contact Alpha History.