Robert James (1703-1776) was a London physician and author. James was born in Staffordshire and educated at both Oxford and Cambridge. By the mid-1740s, he owned a busy medical practice in London. He also established friendships with the literary elite, including John Newbery and Samuel Johnson.

During his career, James developed and patented several medicines. His most popular concoction was ‘Fever Powder’, a dangerous mix of antimony and calcium phosphate that was still being sold into the early 20th century. James also penned numerous medical guides, including his three-volume Medical Dictionary and a 1747 guide to medicines called Pharmacopoeia Universalis.

The latter contains a section on the medicinal value of human by-products. One of the most versatile of these, writes James, is dried menstrual blood. Provided it is taken from the first flow of the cycle, menstrual blood can be of great benefit:

“Taken inwardly it is commended for the stone[s] and epilepsy… Externally used it eases the pains of gout… It is also said to be of service for the pestilence, abscesses and carbuncle… [It also] cleans the face from pustules.”

“…a draught of the husband’s urine”.

Source: Robert James, Pharmacopoeia Universalis, 1747. Content on this page is © Alpha History 2016. Content may not be republished without our express permission. For more information please refer to our Terms of Use or contact Alpha History.

Histories of Victorian Britain are filled with tragic stories of young chimney sweeps. Recruited at age four or five and apprenticed to so-called ‘master sweeps’, these young boys endured long hours, horrendous treatment and atrocious working conditions. Chimney sweeps usually worked in the pre-dawn hours, after flues had cooled and before morning fires were lit. With hands and knees, they were forced to shimmy up dark narrow flue spaces packed thick with soot and debris.

Regular inhalation of this soot caused many young sweeps to contract respiratory illnesses such as tuberculosis. Some also acquired an aggressive form of testicular cancer, colloquially known as “soot wart” or “sooty balls”. Thomas Clarke, a Nottingham master sweep, told an 1863 inquiry:

“I have known eight or nine sweeps lose their lives by the sooty cancer. The private parts which it seizes are entirely eaten off, caused entirely by ‘sleeping black’ and breathing the soot in all night.”

Workplace accidents posed a more immediate danger for these young chimney sweeps. The English press of the late 18th and 19th century was filled with dozens of reports of fatal accidents involving ‘climbing boys’. Some fell from roofs or down chimney structures; others become lodged in flues and suffocated; a few were roasted alive after being forced up chimneys still hot from the previous night’s fire.

One of the more tragic incidents occurred in Lothbury, near the Bank of England, where two young sweeps were sent into a baker’s chimney, one from each end:

“The [first] boy reported that the chimney contained a great deal of rubbish… not answering his master’s call, suspicion arose that he was either sulky or in a dangerous predicament. A stone in the cellar was accordingly taken up and the boy [was] found dead. The master called to the [second] boy who answered him by saying that he was so jammed in that if immediate relief was not given he should die, and this unfortunately was the case… The whole of this happened in ten minutes… Both the lads were very young and small, the oldest not more than eight years.”

Source: The Gentleman’s Magazine, vol. 95, 1804. Content on this page is © Alpha History 2016. Content may not be republished without our express permission. For more information please refer to our Terms of Use or contact Alpha History.

Francois Chopart (1743-1795) was a French physician and surgeon. Born and trained in Paris, Chopart became professor of surgery at the Ecole Pratique before his 30th birthday. During his medical career, Chopart developed several new procedures, including facial surgery, skin grafts and partial amputations of the foot. He was best known, however, for his pioneering research into urology and urological disorders.

Writing in his 1791 book Traité des Maladies des Voies Urinaires, Chopart described the strange case of a French shepherd, whose masturbatory habits led him to cleave his penis into two:

Gallien found that inserting and gently pistoning this foreign object in his urethra enabled him to reach orgasm. He maintained this method for another six years until, according to Chopart, the inside of his urethra became “hard, insensitive and calloused”. Gallien was again reduced to a state of constant erection. Being “of total repugnance to women, which is often the case with masturbators” the frustrated shepherd had no means of sexual relief. It was then he took drastic measures:

“In utter despair he took a pocket knife and made an incision in the glans of the penis. This was accompanied by minimal pain but was followed by an agreeable sensation and orgasm and copious emission… Once again able to satisfy his venereal desires, he frequently performed the same operation, with the same result. After carrying out this shocking mutilation perhaps a thousand times, he at length failed. He then divided the penis, by a lengthways incision, into two equal halves, from the opening of the urethra to the symphysis pubis [base of the penis].”

Source: Francois Chopart, Traité des Maladies des Voies Urinaires, Paris, 1791. Content on this page is © Alpha History 2016. Content may not be republished without our express permission. For more information please refer to our Terms of Use or contact Alpha History. 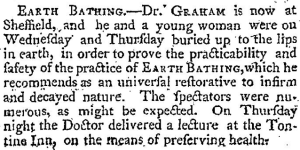 The medicinal value of tobacco was a hot topic among 18th physicians, qualified and otherwise. Many hailed the leaf as a wonder drug, capable of treating everything from epilepsy to dropsy.

Others were more sceptical. In 1720, a 32-page pamphlet, published anonymously in London, condemned the social and psychological effects of tobacco – yet hailed it as a treatment for some minor illnesses and afflictions. Tobacco could be effective as a laxative, claimed the author. Those who smoke or chew it, then swallow either “a little of the smoke” or “their spittle impregnated with its juice”, would soon “obtain two or three stools”.

Tobacco was also considered an effective treatment for abdominal pain, gripe and bowel obstructions. The 1720 pamphlet cites the case of a patient suffering “violent iliac passion” or “twisting of the guts”. He was cured of his sufferings after being given tobacco in an unusual fashion:

“[The patient was given] a decoction of it in urine, for a clyster (enema)… After having, with much difficulty, injected the clyster, the patient was constantly rolled upon the floor for some considerable time, till he felt a strong motion for a stool, at which time there was a copious discharge of hard excrements and wind, to the sudden relief of the tormented patient and the joy of his despairing friends.”

Later in the 1700s, William Buchan endorsed the use of tobacco as a laxative, though he preferred to apply it in the form of smoke, blown into the bowels with a pressure enema. Where medical help or specialist equipment was not available, Buchan advised readers that “the business may be done with a common tobacco pipe” – presumably one no longer used for smoking:

“The bowl of the pipe must be filled with tobacco, well kindled, and after the small tube has been introduced into the fundament, the smoke may be forced up by blowing through a piece of paper full of holes, wrapped around the mouth of the pipe…”

Source: Anonymous, A Dissertation on the Use and Abuse of Tobacco, in relation to Smoaking, Chewing and Taking of Snuff, &c., London, 1720; William Buchan, Domestic Medicine, or a Treatise on the Prevention and Cure of Diseases, London, 1791. Content on this page is © Alpha History 2016. Content may not be republished without our express permission. For more information please refer to our Terms of Use or contact Alpha History.