In 1725 Dr Robert Payne wrote to the Royal Society about a strange case at his surgery in Lowestoft, Suffolk. Earlier in the year, Dr Payne was visited by James Bishop, a teenaged apprentice from the dockyards in Great Yarmouth. Bishop complained of severe abdominal pains, bloody urine and pus in his stools. On inspection of Bishop’s person, Dr Payne found:

“A hard tumour in the left buttock, on or near the gluteus maximus, two or three inches from the verge of the anus, a little sloping upwards… Shortly after the prongs of a fork appeared through the orifice of the sore… I made a circular incision about the prongs and with a strong pair of pincers extracted it, not without great difficulty, handle and all… the end of the handle was besmeared with excrement [and the fork was] six inches and a half long.”

As might be expected, this procedure was excruciating for the patient, however, he recovered after a few days’ rest. Bishop refused to tell Payne how the fork came to be in his posterior – but Bishop’s family threatened to disown him if he did not confess the truth. According to Payne’s report, Bishop later admitted that:

“…being costive [constipated], he put the said fork up his fundament, thinking by that means to help himself, but unfortunately, it slipped up so far that he could not recover it again… He says he had no trouble or pain till a month or more after it was put up.”

Source: Letter from Dr Robert Payne to the Royal Society of London, November 5th 1725. Content on this page is © Alpha History 2016. Content may not be republished without our express permission. For more information please refer to our Terms of Use or contact Alpha History.

Ambroise Pare was arguably the most famous barber-surgeon of the 16th century. Pare served as a medical advisor to several French kings and once saved the life of a military officer who had been run through 12 times with a sword. In Pare’s Oeuvres, a collection of surgical memoirs written near the end of his life, he recalled a strange case from the early 16th century.

According to Pare, a woman near Blois had delivered a baby with the “face of a frog”. In 1517, the family was visited by a military surgeon, who examined the child and asked how it came to be deformed. According to the child’s father:

“His wife had a fever… in order to cure it, one of her neighbours advised her to take a live frog in her hand and hold it until it died. That night she went to bed with her husband, still holding the frog in her hand… They copulated and she conceived, and through the influence of her imagination [she now] has this monster that you have seen.”

Pare’s writings contain another incident involving frogs. In 1551 Pare was consulted by a mentally disturbed man who was convinced his insides were inhabited by frogs, which were “leaping about” in his stomach and intestines. Pare issued the patient with a strong laxative, resulting in “urgent emissions” from his bowels – and then secretly slipped some small live frogs “into his close stool”. The patient, apparently satisfied that the frogs were discharged, left feeling much better.

Source: Ambroise Pare, Les Oeuvres d’Ambroise Pare, 1664 edition. Content on this page is © Alpha History 2016. Content may not be republished without our express permission. For more information please refer to our Terms of Use or contact Alpha History.

This amusing but unsubstantiated story comes from rural Lincolnshire, just north of Gainsborough. According to press reports from 1839, a tailor named Kellett was in nearby Epworth on business when he went on a bender and:

“…sold his wife to a saddler of that place, for a tub (twelve pecks) of Swede turnips… One huge turnip was given as deposit to make good the bargain.”

The drunken tailor may have forgotten the arrangement or not taken it seriously. The Epworth saddler, however, had different ideas. He organised for the balance of the turnips to be delivered to Kellett’s home in Owston Ferry. It all went wrong when delivery of the turnips was taken by the tailor’s wife, who had not been informed of the deal and certainly did not approve:

“…Having heard of the whole transaction, and not liking to be disposed of in such a manner, [she] fell on the poor unfortunate tailor and did beat him about the head with the turnips, then turned him out of the house.”

Source: The Lincoln Gazette, February 21st 1839. Content on this page is © Alpha History 2016. Content may not be republished without our express permission. For more information please refer to our Terms of Use or contact Alpha History.

In July 1912, US newspapers reported that a live frog had inhabited a Washington woman’s gullet for almost a year. According to the patient, Mrs V. L. King, the frog had been resident in her throat, oesophagus and upper stomach for around 11 months.

According to Mrs King’s account, she swallowed a tadpole in drinking water back in August 1911. In the months that followed, it metamorphosed into a frog. By May 1912, Mrs King’s family members could hear the frog croaking in her chest. After weeks of poor health and weight loss, Mrs King consulted surgeons, who dealt with the frog accordingly: 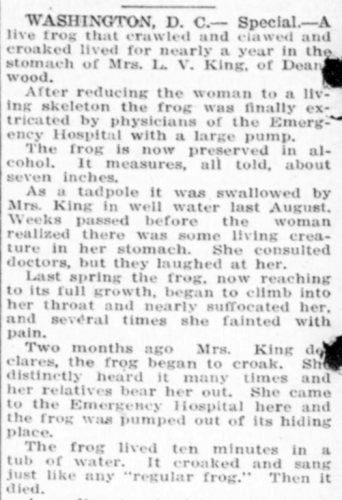 Strangely enough, claims of frogs taking up residence in early 20th-century stomachs were not uncommon. In July 1906, Fred Hamm of Lakeview, Iowa vomited up an inch-long frog that had given him internal grief for more than a week. The following month, a Kansas farmer named Roy L. Steward told reporters he had been harbouring a small frog in his oesophagus for several years. There were other reports of body-invading frogs in 1909 and 1911.

There is no medical evidence or expert opinion to support the notion of frogs growing to maturity inside the human body.

Source: The Citizen (Pennsylvania, July 31st 1912; The Spokane Press, August 7th 1906; The Brownsville Daily Herald, July 12th 1906. Content on this page is © Alpha History 2016. Content may not be republished without our express permission. For more information please refer to our Terms of Use or contact Alpha History.

Gerallt Gyrmo, or Gerald of Wales, was a prominent clergyman, theologian and diarist of the late 12th and early 13th centuries. Educated in England and France, Gerald became chaplain to Henry II in the mid-1180s. He also accompanied the future King John, then a teenager, on a tour of Ireland.

In his 1188 manuscript Topographica Hibernica, Gerald wrote at length about his experiences in the Emerald Isle. In keeping with English sentiments of the age, his views of Ireland and its people were almost wholly negative. He described the Irish as a race of “rude people… living like beasts”, “given to treachery more than any other nation”, “frightfully ugly”, “adulterous and incestuous” and “foully corrupted by perverse habits”. Their only civilised talent, Gerald writes, is:

“…playing upon musical instruments, in which they are incomparably more skilful than any other nation I have ever seen… In their musical concerts they do not sing in unison like the inhabitants of other countries but in many different parts… who all at length unite with organic melody.”

One of the more fanciful accounts in Gerald’s work, not witnessed by him but recounted as fact, was a ceremony for crowning Irish kings:

“The whole people are gathered in one place, a white mare is led into the midst of them… he who is to be inaugurated… comes before the people on all fours… The mare being immediately killed and cut in pieces and boiled, a bath is prepared for [the king] from the broth. Sitting in this, he eats of the flesh which is brought to him, the people partaking of it also. He is also required to drink of the broth in which he is bathed, not drawing it in any vessel but lapping it with his mouth. These unrighteous rites being duly accomplished, his royal authority and dominion are ratified.”

Source: Giraldus Cambrensis (Gerald of Wales), Topographica Hibernica, 1188. Content on this page is © Alpha History 2016. Content may not be republished without our express permission. For more information please refer to our Terms of Use or contact Alpha History.