James Weir Jr. (1856-1906) was an American physician, naturalist and author. Born into a prominent Kentucky family, Weir obtained a medical degree before setting up a practice in his native Owensboro. The wider medical community came to know Weir through his prolific writings. A student of Charles Darwin, Dr Weir wrote extensively about the distinctions between human beings and animals. He was particularly fascinated by regressive and animalistic behaviours in humans.

Among the works published by Weir were Pygmies in the United States, Religion and Lust and Dawn of Reason, or Mental Traits in the Lower Animals. In an essay called “A Little Excursion into Savagery”, Weir confesses to taking a week off every June so he can romp around the Kentucky forest “living like a savage”, dwelling in a cave and eating roasted squirrel. Weir was also willing to use his pseudo-scientific theories as a political device. In 1894, he penned an essay asserting that striking and rioting workers were “evidence of [evolutionary] degeneration”.

The following year, Weir went even further, claiming that female suffrage would create to generations of degenerate women with unhealthy masculine features. He cited historical examples of oversexed and overly masculine female leaders, including Messalina, Joan of Arc, Elizabeth I (“she was more man than woman”) and Catherine the Great (“a dipsomaniac and a creature of unbounded and inordinate sensuality”). If women were given the vote and access to political power, Weir claimed, over time they become “viragints”:

“Viraginity has many phases… The tomboy who abandons her dolls and female companions for the marbles and masculine sports of her boy acquaintances… The loud talking, long stepping, slang using young woman… The square-shouldered, stolid, cold, unemotional, unfeminine android…”

According to Weir, those who promote female suffrage and equal rights – suffragettes and campaigners like Susan B. Anthony – are already viragints, “individuals who plainly show that they are physically abnormal”. Extending suffrage to women would cause a slow but inevitable and widespread shift toward viraginity:

“The simple right to vote carries with it no immediate danger. The danger comes afterward, probably many years after the establishment of female suffrage, when woman, owing to her atavistic tendencies, hurries ever backward toward the state of her barbarian ancestors. I see in the establishment of equal rights, the first step toward that abyss of immoral horrors…”

Weir died in agony of ‘abdominal dropsy’ while holidaying in Virginia Beach. He was 50 years old. Fourteen years after his death, an amendment to the United States Constitution gave American women full suffrage.

Source: James Weir Jr. MD, “The Effect of Female Suffrage on Posterity” in The American Naturalist, vol.29, September 1895. Content on this page is © Alpha History 2016. Content may not be republished without our express permission. For more information please refer to our Terms of Use or contact Alpha History.

1913: St Louis police are holding three young people for “dancing the tango to music from an electric piano”. 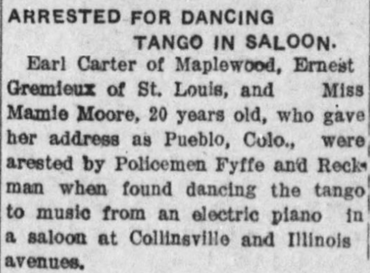 Source: The Mexico Weekly Ledger, December 11th 1913. Content on this page is © Alpha History 2016. Content may not be republished without our express permission. For more information please refer to our Terms of Use or contact Alpha History.

In 1814, the Boston Manufacturing Company dammed the Charles River at Waltham, around 10 miles west of Boston. The Waltham dam created a scenic network of waterways, popular with holidayers and day-trippers.

By the turn of the 20th century, the Charles River lakes had become Boston’s own ‘Lover’s Lane’. Hundreds of young couples caught trains or streetcars to the riverside area of Newton, where they could hire canoes from numerous boathouses. Once on the water, it was not difficult to find seclusion in the many creeks, coves and wooded inlets. Most used this solitude to court without the glaring oversight of parents. The more daring couples used their canoe time as an opportunity to sit close, kiss, pet and whatever else took their fancy.

As might be expected, the interest in canoeing exploded, particularly among young middle-class Bostonians. A state report from January 1903 said the number of canoes on the Charles had increased from 700 to 3,500 in just two years. On warm moonlight nights, there could be as many as 100 canoes still on the water, hours after dark.

What went on in these canoes was public knowledge back in Boston, where locals responded with a combination of humour and moral outrage. Wowsers condemned “canoe mania” as yet another example of the disintegration of moral values. Residents living along the river registered numerous complaints about what they had seen taking place in canoes.

According to the Boston Post, a local Baptist minister told his flock not to allow their children onto the lakes, warning that “if these canoes could speak, what awful tales they would tell!”. One park ranger told the press:

“It is not a very nice spectacle to see a couple of opposite sexes lying in the bottom of a boat with a blanket thrown over them.”

In August 1903, the state’s Metropolitan Parks Commission (MPC) moved to crack down on canoe canoodling. New regulations prohibited “any obscene or indecent act” in the confines of the Charles River reserve. In practice, this meant that couples of the opposite sex could not kiss, embrace, lay down in their canoe or conceal themselves or their actions. Park rangers flooded the area in the summer of 1903 and a local man became the first to fall foul of the MPC’s prophylactic regulations:

“No longer will the young man with the white ducks and canvas shoes be permitted to hold the paddle with one hand and the waist of his best girl with the other… Recently the park commissioners decided that an arm around the waist, a kiss stolen on the sly or a parasol so held that those nearby could not see the faces of the occupants constituted an offence punishable by a fine… In the quiet shade of a giant tree, as their canoe skated slowly in the water, Matthew Petersen of Dorchester improved the occasion to plant a kiss upon the lips of Miss Flora Smith of New York, the couple was arrested.”

Mr Petersen was fined $20 and a handful of others were also arrested. These events sparked a month of protest by Charles River canoeists, who defied the “sit up straight” regulations by laying down in their boats whenever they spotted a park ranger. Despite these protests, the MPC’s crackdown on canoe fornication continued the following season. There were eight arrests for indecency in 1904 and seven in 1905, before arrests declined in subsequent years.

Sources: Metropolitan Parks Commission report, January 1905; Boston Post, August 18th 1903; Palestine Daily Herald, September 9th 1903. Content on this page is © Alpha History 2016. Content may not be republished without our express permission. For more information please refer to our Terms of Use or contact Alpha History.

In 1899, German physician Dr F. Waetzold published a short essay claiming that playing the piano was contributing to an increase in mental disorders among teenage girls and young women. According to Waetzold, his research had uncovered some alarming links between piano-playing and neurotic disorders. One condition prominent among young pianists was chlorosis or ‘green sickness’, an anaemic fatigue thought by many Victorian physicians to be a product of unfulfilled sexual excitement.

Girls who studied the piano before the age of 12, wrote Waetzold, were six times more likely to contract chlorosis or neuroses than those who did not. His solution was simple:

“It is necessary to abandon the deadly habit of compelling young girls to hammer on the keyboard before they are 15 or 16… Even at this age, the exercise should be permitted only to those who are really talented and possessed of a robust temperament.”

Choosing another instrument was not necessarily an option, according to Waetzold, because “studying the violin appears to produce even more disastrous results”. It seems that Dr Waetzold was not a music fan – or perhaps he lived within earshot of some decidedly untalented young musicians.

Source: Dr F. Waetzold, “Le piano et névroses” in Journal d’Hygiene, January 5th 1899. Content on this page is © Alpha History 2016. Content may not be republished without our express permission. For more information please refer to our Terms of Use or contact Alpha History.

Published in the 1830s, the Graham Journal of Health and Longevity was a vehicle for the ideas of New England dietary reformer and social puritan Sylvester Graham (1794-1851). Funded by Graham and his supporters, the journal’s articles emphasised healthy living, vegetarianism and the dangers of sexual excess and self-pleasure.

“In consequence of his rapid growth, excessive labour, errors in diet and that practice which is secretly sapping the constitutions of thousands of our youth… his robust frame shrunk under the action of disease. His spine and the bones of the chest became greatly distorted; his body was much deformed and his manly stature considerably diminished.”

Kinney’s onanistic hobby rendered him physically incapable of labouring on the family farm. As a consequence, he was forced to “turn his attention to study” and become a teacher of mathematics.

Kinney died in October 1839 at the Massachusetts home of Dr Alcott, an associate of Sylvester Graham. Genealogical records confirm Kinney’s existence and death, though the real medical reasons for his demise are unknown. As for Graham, he continued his campaign against unhealthy sexual urges, championing clean living, bland diets and the cracker that bears his name.

Source: “Obituary notice of A. F. Kinney, A. M.” in Graham Journal of Health and Longevity, vol. 3 no. 24, November 23rd 1839. Content on this page is © Alpha History 2016. Content may not be republished without our express permission. For more information please refer to our Terms of Use or contact Alpha History.