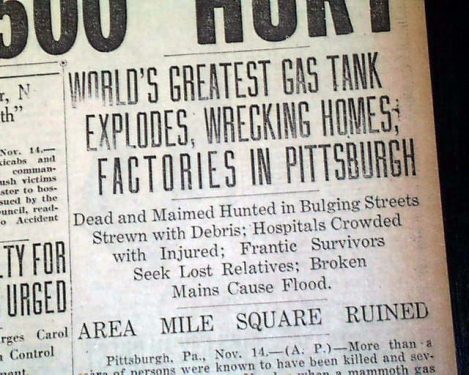 One of the world’s largest gas explosions occurred in Pittsburgh, Pennsylvania in November 1927. It occurred in the Equitable Gas Company’s gasometer, a prominent city landmark billed as the largest man-made gas tank on Earth.

On the morning of November 14th, a team of workmen was sent to investigate a gas leak in an adjoining side tank. Thinking it safe, they began to repair the tank with acetylene blowtorches. Their flames ignited more than five million cubic feet of natural gas in the main tank, blowing it to pieces.

According to eyewitness accounts, the explosion created a fireball that reached 200 metres in height. The blast shook Pittsburgh like an earthquake and was felt in four different states. More than a square mile of the city was levelled, leaving several thousand people homeless. Metal shards, broken glass and burning debris rained down on the city for an hour. Large chunks of debris landed more than a mile from the scene. More than 800 people were seriously injured – but surprisingly only 28 were killed, including the workmen who triggered the explosion.

Source: Pittsburgh Post-Gazette, November 15th 1927. Content on this page is © Alpha History 2016. Content may not be republished without our express permission. For more information please refer to our Terms of Use or contact Alpha History.