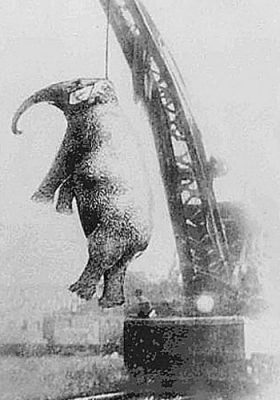 In September 1916, Sparks World Famous Circus set up in Kingsport, north-east Tennessee. One of the circus’s most popular exhibits was Mary, a five-ton Asian elephant. On September 12th, Mary was being watered at a local pond when she turned on a circus employee, Red Eldridge, throwing him to the ground and stomping on his head. As might be expected, Eldridge was killed instantly.

Eldridge’s death created a firestorm of public anger, worsened by irresponsible press reporting. Newspaper accounts claimed that “Murderous Mary” had gored Eldridge to death when in reality, she had no tusks. It was also falsely claimed that “Mary had slain her eighth man”.

Facing a boycott, circus owners agreed to a public lynching in Erwin, the nearest town with a crane sufficient for the task. A Kentucky newspaper described the execution:

“The showmen chose to hang the beast. A derrick car of the Carolina Clinchefield & Ohio Railway was used. Heavy chains were looped about the elephant’s neck and the steam-operated crane lifted the massive form into the air. The animal struggled for quite a while before death finally resulted from strangulation.”

In reality, the first attempt to string Mary up was thwarted by a broken chain. The elephant fell, fractured its pelvis and writhed on the ground in agony while those in charge arranged a second attempt. The sordid spectacle was watched by 3,000 people, including local children who were given time off school to attend. A post-mortem on the elephant’s body revealed a jaw infection that probably triggered her attack on Eldridge.

Source: Hopkinsville Kentuckian, September 30th 1916. Content on this page is © Alpha History 2016. Content may not be republished without our express permission. For more information please refer to our Terms of Use or contact Alpha History.