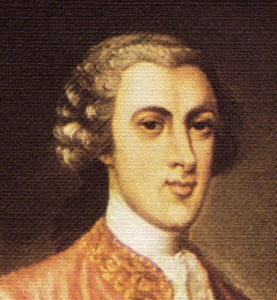 Frederick Calvert, the 6th Baron Baltimore (1731-71) was one of the 18th century’s most notorious womanisers. When his father died in 1751, Calvert inherited his titles and the family’s most lucrative asset: the colony of Maryland. Frederick Calvert would never set foot in America, however, rents and taxes from Maryland funded his decadent existence in Europe.

Calvert married after his 22nd birthday but despised his wife and separated from her almost immediately. She died five years later after falling from a fast-moving carriage. Calvert was also in the vehicle and many believed he had pushed her.

His wife’s premature death kick-started Calvert’s life of self-indulgence. He travelled around Europe and lived for more than a year in the Ottoman Empire, where he surrounded himself with a private harem staffed by local women. Back in London in the 1760s, Calvert continued his sexual antics, taking several mistresses and fathering a host of illegitimate children.

In 1768, Calvert was accused of kidnapping, falsely imprisoning and raping Sarah Woodcock, a noted beauty who ran a London hat shop. He was acquitted after claiming that Woodcock had consented to the whole affair, though few outside the pro-Calvert jury believed it. After the trial, one of Calvert’s former mistresses further embarrassed him by writing a tell-all book, suggesting that he was sexually inadequate.

Eager to escape the scandal, Calvert assembled another harem and embarked on another grand tour of Europe. According to an Austrian noble who encountered him:

“…My Lord [Baltimore] was travelling with eight women, a physician and two negroes, which he called his corregidores… With the aid of his physician he conducted odd experiments on his houris [harem]: he fed the plump ones only acid foods and the thin ones milk and broth. He arrived at Vienna… when the chief of police requested him to declare which of the eight ladies was his wife, he replied that he was an Englishman.”

Calvert contracted an illness and died in Italy in 1771, by which time his travelling harem had doubled in size. His body was returned to England for an extravagant funeral, though few genuinely grieved his loss.

Source: Letter from Count Maximilien von Lemberg, December 2nd 1770. Content on this page is © Alpha History 2016. Content may not be republished without our express permission. For more information please refer to our Terms of Use or contact Alpha History.