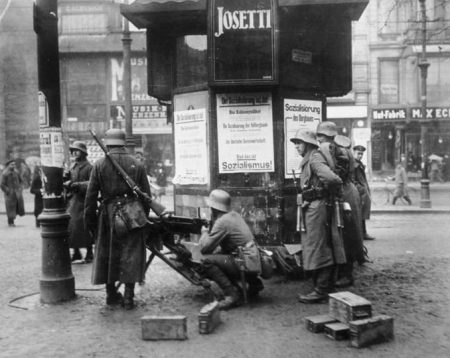 The Kapp putsch was a March 1920 attempt to overthrow the Social Democratic Party (SPD) government, carried out by army officers, Freikorps members and right-wing nationalists. The attempted coup was thwarted by public opposition, divisions within the military and misjudgements by those who initiated it. The Kapp putsch exposed ongoing tensions between civilian and military authority in Germany, as well as the weakness of the new Weimar republican government. It also suggested German militarism was far from dead.

Even before the November 1918 armistice, Germany was becoming a hotbed for reactionary groups and political extremism. Defeat suppressed the nation’s affection for monarchism and ultra-nationalism – but only in some circles.

Traditional political ideas took refuge in a number of political parties and fringe groups, who clung to theories like the Dolchstosslegende (‘stab-in-the-back legend’), a baseless conspiracy theory that Germany had surrendered because of weak or treacherous elements in the civilian government.

The Dolchstosslegende allowed the military to dodge criticism or accountability for Germany’s defeat in 1918. As a consequence, it allowed the survival of German militarism and military prestige.

Wartime commanders like Paul von Hindenburg and Erich Ludendorff, themselves both public exponents of the Dolchstosselegende, were able to avoid personal responsibility for Germany’s defeat. Hindenburg, Ludendorff and other prominent military commanders continued to be seen as heroes and were able to maintain their political influence.

At the end of World War I, as the army was demobilised, its officers and soldiers returned to civilian life. These war veterans found Germany exhausted by the war, starved by the Allied food blockade and disrupted by attempted communist revolutions. Civilian jobs were hard to come and many ex-soldiers found themselves out of work.

Some of these former soldiers joined the ranks of the Freikorps, the paramilitary brigades and militias formed to suppress the Spartacist revolution in early 1919.

By the middle of the year, Freikorps membership was estimated at around 300,000 men. Its numbers grew in response to the Treaty of Versailles, which limited the size of the regular army to just 100,000.

Military commanders and some politicians encouraged and supported the Freikorps. General Hans von Seeckt, for instance, viewed the Freikorps an important reserve army. Such an organisation was illegal under the terms laid down at Versailles but in von Seeckt’s view was essential for the defence of Germany. In some quarters, the Freikorps was known as the ‘Black Reichswehr‘.

As the Freikorps grew steadily through 1919, the relationship between Friedrich Ebert‘s government and the Reichswehr deteriorated.

The civilian government sought to implement the terms of the Treaty of Versailles, ordering reductions in Reichswehr numbers. The government also urged structural reforms to the officer corps, chiefly to ensure the Reichswehr’s obedience to civilian authority and loyalty to the Republic.

Reichswehr generals resisted these changes. They opposed significant reductions, claiming they would put Germany at risk from external threats or an internal revolution. Reichswehr officers were also panicked by rumours, apparently unfounded, that the government was to permit the extradition of German officers to Allied countries, to stand trial for war crimes.

As these rumours circulated and tensions grew, some officers began to talk of a military putsch to remove the SPD government. One of their number was Walther von Lüttwitz, commander-in-chief of Reichswehr divisions in Germany’s north and one of the country’s highest-ranked officers.

The trigger for the putsch came in March 1920 when the government ordered the disbanding of two large Freikorps units. Lüttwitz responded by meeting Ebert and defence minister Gustav Noske and issuing a series of nationalist political demands, such as the abolition of the National Assembly and the restoration of the old Reichstag. Noske and Ebert refused and ordered Lüttwitz’s resignation.

On March 13th 1920, the Ehrhardt brigade occupied critical points around Berlin and took control of the capital, forcing Weimar ministers to flee to Stuttgart. To obfuscate the military nature of the putsch, von Lüttwitz recruited Wolfgang Kapp, a minor public servant, as its nominal leader.

For two days, Kapp attempted to justify the putsch and whip up support. He issued a grandiose public statement, attempting to legitimise the putsch by claiming Germany was in danger of communist invasion:

“Militant Bolshevism threatens us with devastation and violation from the east. Is this government capable of fending it off? How will we avoid external and internal collapse? Only by re-establishing the authority of a strong state. What concept should lead us in this endeavour? Nothing reactionary, instead, a further free development of the German state, restoration of order, and the sanctity of law. Duty and conscience are to reign again in German lands. German honour and honesty are to be restored.”

The response to Kapp’s rallying cry was a combination of confusion, uncertainty and public opposition. The Reichswehr leadership found itself so divided by the putsch that in the end, it did almost nothing. The army did not respond to government orders to move against rebellious Freikorps units in Berlin – but it also ignored Wolfgang Kapp’s call to arms against the government.

SPD ministers also called on the German people to resist the “counter-revolution” and protect the republic by implementing a general strike. This was broadly supported by the Independent Social Democrat Party (USPD), other left-wing and centrist parties and the trade unions, who provided leadership and organisation for these strikes.

The response of this call for industrial action was swift. Within two days, Berlin had no trains, no water, no gas and no electricity. The aspiring Kapp government was confined to the capital and paralysed by what one socialist called the “terrible silent power” of the general strike.

Five days after it had begun, Kapp and von Lüttwitz’s attempted coup fizzled, forcing both men to flee Berlin. Kapp took refuge in Sweden for two years before returning to Germany to face trial. He died before this trial was completed. Lüttwitz took up exile in Hungary until granted amnesty to return to Germany in 1924.

Ironically, the Kapp putsch almost triggered the communist revolution it was fomented to prevent. The mobilisation of KPD, USPD and radical union groups in response to the putsch led to several communist insurrections around Germany. Red Army units took control of several cities in the Ruhr region, only to be suppressed by the Freikorps and Reichswehr within three weeks.

While the Kapp putsch produced no change in power, the SPD government was exposed as tenuous, fragile and easy prey for revolutionaries. The Reichswehr, which should have come to the government’s assistance, had failed to do so and left the government to its own fate. The Freikorps, a group the civilian government encouraged and relied on January 1919, seemed to turn against it. The difficult political realities of the young republic had been painfully exposed.

A historian’s view:
“The abortive putsch failed to produce a reaction against the Right. In the Reichstag elections of June 1920, the SPD and DDP’s share of the vote roughly halved while the Independent Socialists and Nationalists saw their support blossom. This was the first instance of what Richard Bessel has termed ‘a defining characteristic of Weimar politics’, the tendency of the electorate to punish those ‘parties which had accepted governmental responsibility and thus responsibility for necessarily unpopular decisions’.”
Colin Storer

1. In 1919, the Weimar government attempted to downsize the military, in line with the Versailles treaty, and reform the officer corps to ensure its loyalty.

2. These changes were resisted by some officers of the Reichswehr, who claimed Germany would be exposed to communist aggression.

3. In March 1920, a large Freikorps brigade seized control of Berlin and a public servant named Wolfgang Kapp claimed the chancellorship.

4. The attempted putsch failed within days after the Reichswehr ignored its call to arms and a general strike paralysed Berlin.

5. The Kapp putsch exposed the critical weakness of the Weimar government and highlighted both the Reichswehr and Freikorps as forces of considerable political influence.

Citation information
Title: “The Kapp Putsch”
Authors: Jennifer Llewellyn, Steve Thompson
Publisher: Alpha History
URL: https://alphahistory.com/weimarrepublic/kapp-putsch/
Date published: September 17, 2019
Date accessed: Today’s date
Copyright: The content on this page may not be republished without our express permission. For more information on usage, please refer to our Terms of Use.