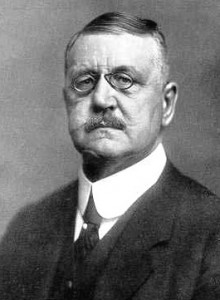 Wolfgang Kapp (1858-1922) was a Prussian bureaucrat, journalist and politician. He is best known as the titular leader of the Kapp putsch, a failed military coup in March 1920.

Kapp was born in New York to German parents who returned to Europe when he was aged 11. His father, Friedrich, was a politician of liberal-progressive views.

Wolfgang Kapp was trained as a lawyer, earning a doctorate. He entered the Prussian civil service, rising to managerial positions while accumulating considerable landholdings and personal wealth.

Kapp’s politics were conservative, monarchist and enthusiastically nationalist. He supported German involvement in World War I and opposed the abdication of the Kaiser in 1918.

Kapp was closely associated with Alfred Hugenburg and was on friendly terms with high-ranking military officers including Admiral von Tirpitz, Erich Ludendorff and Walther von Luttwitz.

In 1917, Kapp started his own political party, the German Fatherland Party, and served briefly in the Reichstag. The party was popular for a short time but had faded away by the end of 1918.

Kapp is best known for the 1920 right-wing putsch that attempted to install him as German leader. He was neither well-known nor respected enough for the putsch to attract sufficient support.

When the putsch failed, Kapp fled to Sweden for a time before returning to Germany in 1922. He was charged with conspiracy and treason but died before the commencement of his trial.