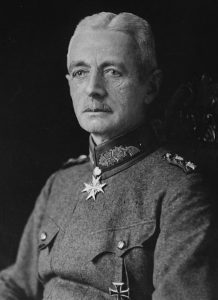 Walther von Lüttwitz (1859-1942) was a German aristocrat and military officer, best known for his leadership of the failed Kapp putsch in 1920.

Lüttwitz was born in Schloss Bodland, the son of an aristocrat. He enlisted in the Prussian Fusiliers as a teenager and was commissioned as a second lieutenant in 1878. By 1912, he was serving as a quartermaster in the General Staff.

On the outbreak of World War I, Lüttwitz was promoted to lieutenant-general and commanded infantry divisions on both the Western and Eastern Front. He earned awards for proficiency and bravery, most notably at Verdun.

Lüttwitz remained in the military after the 1918 armistice. In December 1918, he was put in command of the military garrison in Berlin. He also inherited de facto command of several thousand Freikorps volunteers located in and around the capital.

When defence minister Gustav Noske ordered Lüttwitz to use the Reichswehr and Freikorps to suppress the Spartacist uprising in January 1919, he did so without hesitation. Lüttwitz’s successful defence of the government led to him being named command-in-chief of all German military in May 1919.

Though he despised communism, Lüttwitz had no particular affection for either the Weimar Republic or Social Democratic Party (SPD) politicians. He was openly critical of Friedrich Ebert, frequently engaged in nationalist political commentary and was rumoured to be at the centre of conspiracies to overthrow the government.

In February 1920, following Noske’s order to disband large Freikorps units, Lüttwitz resisted. In meeting with Ebert and Noske, he made numerous political demands, including the restoration of the old Reichstag. His demands were refused and Lüttwitz was ordered to resign.

Lüttwitz’s response became known as the Kapp putsch or Kapp-Lüttwitz putsch. This militaristic counter-revolution failed due to its spontaneous and hasty organisation, coupled with widespread opposition among mainstream political parties, the bureaucracy and trade unions.

When the putsch collapsed, Lüttwitz fled Berlin and ended up in Hungary. He returned to Germany in 1924 and retired to Silesia, where he gave his political support to the German National People’s Party (DNVP) and the National Socialists (NSDAP).