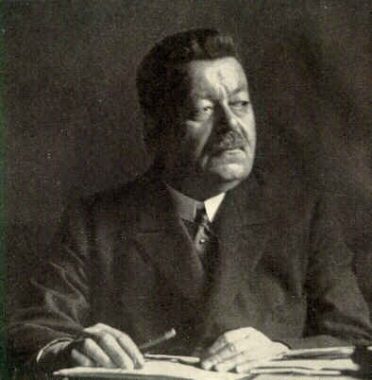 Friedrich Ebert (1871-1925) was a German unionist leader turned socialist politician and the first president of the Weimar Republic.

Ebert was born in Heidelberg just two weeks after the unification of Germany. His father, Karl, was a Catholic tailor with a successful business, his mother, Katharina, a Protestant housewife. Friedrich was the seventh of nine children.

Ebert was a bright student who was encouraged to enter the priesthood but instead left school at the age of 14. In 1885, he commenced training as an apprentice saddle maker. Later in his political career, the right-wing press would attack Ebert’s working-class origins

After qualifying, Ebert worked and travelled in various German towns and cities. He also became interested in the trade union movement, joining the saddlemaker’s union and the Social Democratic Party (SPD).

In 1890, Ebert was elected as secretary of a trade union federation in Hanover. He also rose through the ranks of the fast-growing SPD, becoming secretary-general in 1905 and party chairman in 1913.

When World War I broke out in 1914, Ebert and the core of the SPD gave the Wilhelmine government unconditional support for the war effort. This war policy led to the factionalisation of the party and the formation of its radical left-wing splinters, the Independent Social Democratic Party (USPD) and Communist Party (KPD).

Ebert became a critical figure when the Kaiser’s government began to collapse in October 1918. A social-democrat rather than a socialist, Ebert resisted radicalism and revolution, in the hope that Germany would transition and evolve into a parliamentary democracy.

In November 1918, Ebert inherited the leadership of the new republic, following the abdication of the Kaiser and the resignation of chancellor Max von Baden. In January the following year, he was confirmed as the Weimar Republic’s first president.

Though Ebert conducted himself well and was widely respected, his presidency divided opinion. He was hated by right-wing nationalists, who thought him weak, and socialists in his own party, who thought him a class traitor.

Ebert’s reliance on the army and the Freikorps to protect his own government during the Kapp putsch proved especially controversial. Under Ebert’s presidency, the military, the Junker aristocracy and even the Hohenzollern royals retained a significant amount of their pre-war prestige.

The final years of Ebert’s life were spent battling hostile attacks by the nationalist right-wing press, some valid criticisms and some defamatory. These events took a toll on Ebert’s own health and contributed to his premature death in 1925, aged 54.