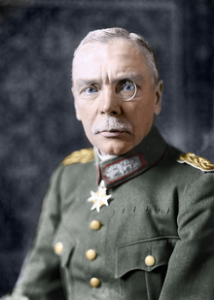 Hans von Seeckt (1866-1936) was a German military officer who commanded the Reichswehr for six years during the Weimar period. During this period, Seeckt oversaw the successful restructuring of the army, often bypassing the restrictions imposed by the Treaty of Versailles.

Hans von Seeckt was born in Silesia, the son of an army general. After completing his schooling, Seeckt enlisted himself and obtained a commission in his father’s old regiment. Within a few years, he was being trained for admission to the General Staff.

Seeckt was a lieutenant-colonel at the outbreak of World War I. He proved himself an effective military strategist and planner, rising through the ranks and earning command positions with both the Austro-Hungarian and Turkish armies.

After World War I, Seeckt was one the few German generals whose reputation remained intact. In March 1920, he was appointed the Chief of the General Staff (commander-in-chief of the German army) following the retirement of Paul von Hindenburg.

Seeckt faced two significant challenges. The first was positioning the German military between the unpopular Weimar government and the rising nationalist movement. He did this by walking a cautious middle ground. Seeckt’s refusal to either side with or put down the Kapp putsch (1920) was one example of this.

A second problem was keeping the army strong and formidable in the face of the restrictions imposed at Versailles. Seeckt did this by encouraging and silently supporting the Freikorps or ‘Black Reichswehr’, toughening training procedures and disciplinary standards and encouraging closer military cooperation with the Soviet Union. This included sending German units for training in Soviet Russia.

Seeckt was initially opposed to Adolf Hitler and the National Socialists (NSDAP). When the NSDAP threatened a national revolution in 1923, Seeckt warned that it would be met with force by the Reichswehr. Hitler later claimed that Seeckt was under the influence of his wife, who was Jewish.

In late 1926, Seeckt was forced to resign from his position, following several controversial decisions, including giving one of the Kaiser’s sons an important command position. He then entered politics, serving in the Reichstag between 1930 and 1932 as a German People’s Party candidate. Seeckt’s politics shifted further to the right and he eventually began endorsing Hitler and the NSDAP.

After Hitler’s rise to power, Seeckt was sent to China to advise Jiang Jieshi (Chiang Kai-shek) and the Nationalist army in their struggle against Mao Zedong’s Communist Red Army. He returned to Germany in 1936 and died in December that year.