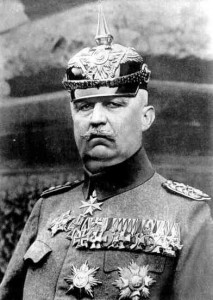 Erich Ludendorff (1865-1937) was a Prussian soldier, general and World War I commander who became a nationalist figurehead during the Weimar era. He joined the National Socialists (NSDAP) briefly and participated in the failed Munich putsch.

Ludendorff was born in Kruszewnia in what is now western Poland. Though his family came from Prussian aristocratic and military backgrounds, they were small landowners and far from wealthy.

A bright student, Ludendorff followed in his father’s footsteps by joining the military as a teenager. He was commissioned in 1883 and excelled both in command and administrative or logistical roles.

In 1894, Ludendorff was elevated to the General Staff. An unabashed militarist, he played an important role in the Kaiser‘s program of military expansion and modernisation prior to World War I.

An intelligent but rigid and humourless figure, Ludendorff was relegated from the General Staff in 1912 following disagreements over policy. He returned after the outbreak of the war, first to oversee the implementation of the Schlieffen Plan, then joining Paul von Hindenburg on the defence of Germany’s eastern frontier.

By the summer of 1916, Ludendorff was Hindenburg’s deputy and, in effect, second in command of the German nation. He was a key figure in planning the 1918 Spring Offensive and its failure led to his dismissal in late October 1918.

The collapse of 1918 hit Ludendorff hard. An exponent of the ‘stab in the back’ mythology, he came to blame Germany’s defeat on the weak Kaiser, duplicitous civilian politicians, half-hearted businessmen and Jewish intriguers.

Ludendorff spent several months in exile in Sweden before returning to Germany in mid-1919. From this point, he became an active figure in right-wing nationalist politics, supporting both the Kapp putsch (1920) and the NSDAP’s failed Munich putsch (1923).

In 1924, Ludendorff won a seat in the Reichstag and formed his own nationalist and anti-religious group. He ran against Hindenburg for the presidency in 1925 but polled poorly, while his relationship with Adolf Hitler and the NSDAP deteriorated as the 1920s progressed.