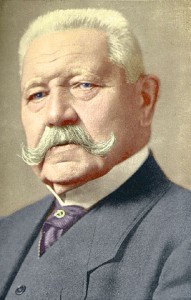 Paul von Hindenburg (1847-1934) was a Prussian aristocrat, military commander and political figure. He is best remembered as the second president of the Weimar Republic and the man who appointed Adolf Hitler as chancellor in 1933.

Hindenburg was born in Posen in 1847, the son of a Prussian aristocrat and his commoner wife. Like other scions of the Junker elite, the young Hindenburg was sent for a military education at cadet schools.

In 1866, Hindenburg was commissioned as a second lieutenant and shipped off to the Austro-Prussian War, where he experienced battle before his 19th birthday. He later served in the Franco-Prussian War (1870-71). As a young adjutant, Hindenburg attended the ceremony that formally unified Germany in 1871.

By 1885, Hindenburg had reached the rank of major and was serving under the famous strategist Count von Schlieffen. In 1903, he was promoted to the rank of general and given command of an army corps in Magdeburg.

In 1911, Hindenburg, by now 64 years old, was pensioned off by the General Staff. He retired to his sizeable land holdings in Prussia but was recalled when World War I began three years later. Hindenburg was given command of the Eighth Army and ordered to fortify East Prussia against a Russian offensive, a mission he successfully completed in September 1914.

These successes saw Hindenburg become enormously popular in Germany. He acquired a reputation as a brilliant military tactician and an inspirational leader that was possibly overstated, since many of Hindenburg’s notable successes were largely the work of subordinates, like Erich Ludendorff.

In August 1916, Hindenburg replaced von Falkenhayn as commander-in-chief on the Western Front. For the remainder of the war, Hindenburg and Ludendorff ruled Germany as de facto dictators. They not only oversaw military tactics but controlled economic policy and production, bypassing the civilian government in the process. This period was known as the ‘Silent Dictatorship’.

In October 1918, with Germany’s defeat imminent, Hindenburg resigned from the army a second time. The following year, he appeared before a commission of inquiry into the war and fuelled the Dolchstosselegende ‘stab in the back’ legend by claiming the German army had been betrayed at home rather than defeated on the frontline.

Hindenburg returned to his Prussian estate in 1919 and was seldom seen or heard from for several years. The death of Friedrich Ebert in February 1925 prompted conservatives to coax the ageing general, now in his 78th year, out of retirement.

Hindenburg’s backers believed the former general would destroy the Weimar Republic from within and restore the imperial monarchy. They were to be sadly disappointed. In his first years of rule, Hindenburg acted thoughtfully, responsibly and adhered to the Weimar constitution.

This situation was changed by the onset of the Great Depression. With greater instability in the Reichstag leading to minority governments, Hindenburg was increasingly forced to invoke his constitutional emergency powers to rule by decree. There were also questions about Hindenburg’s competence and judgement, with some accounts suggesting he was showing signs of senility.

In March 1932, Hindenburg, by now 84, ran for a second presidential term against Adolf Hitler. Though he did not wish to contest another election, Hindenburg’s backers knew that only his popularity could keep Hitler away from the presidency. While Hindenburg was comfortably reelected, it came via the backing of the SPD, a group he had previously detested.

The appointment of Hitler

Hindenburg appointed Hitler as chancellor in January 1933, at the urging of Franz von Papen and others. While Hindenburg disliked the National Socialist (NSDAP) leader, Hitler convinced him that he was working towards the restoration of the monarchy, a goal Hindenburg shared.

Privately, however, Hitler was waiting for the ailing Hindenburg to die so he could merge the chancellorship and the presidency.

By early 1934, Hindenburg was suffering from terminal cancer that had started in his bladder and spread to his lungs. His final months were spent fielding complaints about oppressive Nazi laws and thuggish behaviour of the Sturmabteilung. Hindenburg died on August 2nd 1934 and his presidential powers were immediately claimed by Hitler.