The Weimar Republic was born in the ruins and ravages of World War I. Four years of total war against some of the world’s wealthiest and most powerful nation-states decimated Germany. By October 1918, Germany’s surrender was imminent, its people were starving and its government on the brink of collapse. On these ruins, the Weimar Republic was built.

Germany’s role in the outbreak of World War I is well documented. No single entity did more to instigate a European war than Germany’s haughty Kaiser, Wilhelm II, his overconfident generals and nationalist elites.

In the generation leading up to 1914, Wilhelm II and his government adopted policies, foreign and domestic, that contributed to rising tensions in Europe. German militarism, nationalism and imperialism – along with the Kaiser’s personal and diplomatic belligerence – all fuelled the mood for war.

German strategists drew up ambitious war plans that promised the conquest of France in just a few weeks. Nationalists talked of expanded German imperial control and influence in Africa, Asia and the Middle East. German newspapers thundered against the bully-boy tactics of the ‘old empires’ of Britain and France.

In another time, the national leader might have sought to defuse this belligerent mood. But the German Kaiser was unworldly, ambitious, impatient and eager for confrontation. Where other heads of state might have said little or nothing, Wilhelm talked tough about German interests and intentions.

In June 1914, Franz Ferdinand, an Austrian archduke and heir to the Austro-Hungarian throne, was gunned down by Serbian nationalists in the streets of Sarajevo.

The Austrians were outraged at the murder of their heir. Rather than suggesting a measured and careful response, the German Kaiser gave them tacit approval for an invasion of Serbia. If Russia, an ally of Serbia, attempted to intervene then the Kaiser promised to act.

One historian later called this ‘the Kaiser’s blank cheque’ for war. It should be noted that it was not only his blank cheque. Wilhelm’s position was supported by most German civilian politicians, even moderates in the Social Democratic Party (SPD).

When war did erupt in late July 1914, Germany initiated its famous Schlieffen Plan: a long-standing strategy to invade France via neutral Belgium to avoid heavy fortifications along the French border. The plan succeeded for a time before stalling then ultimately failing.

Instead of marching into France and capturing Paris within a month, as planned, Germany’s invading forces became bogged down in northern France. Defensive warfare replaced rapid advances, leading to the evolution of the Western Front – a 450-mile long network of trenches, minefields and barbed wire, running from the Swiss border to the North Sea.

In the east, German forces were hurriedly mobilised to withstand a Russian advance into East Prussia. They succeeded in pushing the Russians out of German territory, though this led to the development of another theatre of war: the Eastern Front.

The war would rage for almost four more years. By 1915, all major combatants had implemented a condition of ‘total war’, meaning that civilian economies were harnessed to supply and arm forces in the field.

Backed by the nation’s strong industrial sector, the German military held its own on both the Western and Eastern Front. Within Germany, however, the civilian population endured worsening isolation, blockades and shortages. Sandwiched between enemy combatants – the Russians in the east, the British and French in the west – and with a small coastline blockaded by Allied warships, Germany waged war with very little foreign trade.

In late 1914, the Allies took the unusual step of declaring food as “contraband”. Shipments of foodstuffs headed to German ports became subject to seizure or naval attack. The blockade halted German trade and imports, forcing the nation to rely on its domestic production of food. This had also fallen significantly due to labour being conscripted into the army or redeployed to essential wartime industries.

By mid-1916, the German people were feeling the strain of two long years of total war. The civilian government, led by the ineffectual chancellor Theobald Bethmann-Hollweg, had no real answers. Meat, potatoes and dairy products became difficult to obtain while bread was often replaced by unpleasant ersatz substitutes, made from bran or wheat husks.

This period, known by some historians as the ‘Silent Dictatorship’, saw Generals Paul von Hindenburg and Erich Ludendorff assume control of civilian as well as military matters. This junta seized control of the press and propaganda, imposed food rationing and ordered compulsory labour for all civilian males of adult age.

In August 1916, they introduced the Hindenburg Program, which sought to double munitions production by relocating agricultural workers into factories. Ludendorff also forced through the reintroduction of unrestricted submarine warfare against Allied ships – a policy that helped trigger the United States’ entry into the war.

The push for peace

In July 1917, the Reichstag, hitherto supportive of the war effort, responded to the deteriorating situation by passing a resolution calling for peace. This forced the resignation of chancellor Bethmann-Hollweg. He was replaced by unimportant men who served as puppets for Hindenburg and Ludendorff.

By the winter of 1917-18, the availability of food in German cities was critically low. The British naval blockade of German ports had halted food imports while Hindenburg’s reallocation of agricultural labour had a detrimental effect on domestic production.

Germany may well have sought a peace deal in mid- to late-1917, if not for two revolutions in Russia. The collapse of the Russian tsarist government in February 1917, followed by the overthrow of its liberal successor, the Provisional Government, in October, spelt the end of Russia’s involvement in World War I.

With fighting on the Eastern Front war now winding down, this allowed Germany to concentrate its forces on the Western Front. To the German High Command, the war that in early 1917 seemed as if it might drag on forever, now appeared winnable. 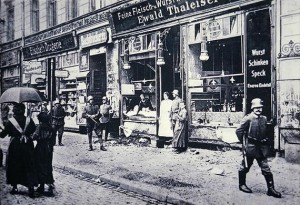 1. Kaiser Wilhelm II and German nationalism and militarism played a leading role in the Europeans tensions leading to the outbreak of World War I.

2. When war erupted in August 1914, Germany’s initial strategy involved an attack on France through neutral Belgium, which drew Britain into the war.

3. By 1916, the war was effectively in a stalemate. Germany found itself surrounded by her enemies, blockaded and unable to import food and supplies.

4. During the war, the Kaiser relinquished control to his military leaders. This ‘silent dictatorship’ redeployed labour to the war effort with dire effects.

5. Two Russian Revolutions in 1917 ended fighting on the Eastern Front. This allowed Germany to refocus its efforts on the Western Front and make a final bid to win the war.

Citation information
Title: “World War I and Germany”
Authors: Jennifer Llewellyn, Steve Thompson
Publisher: Alpha History
URL: https://alphahistory.com/weimarrepublic/world-war-i/
Date published: September 5, 2019
Date accessed: Today’s date
Copyright: The content on this page may not be republished without our express permission. For more information on usage, please refer to our Terms of Use.