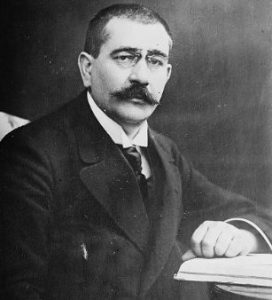 Gustav Noske (1868-1946) was a German politician from the Social Democratic Party (SPD). He is best known for serving as the Weimar Republic’s first defence minister.

Noske was born to a working-class family in Brandenburg. He left school at a young age to train as a basket-maker and wood-turner. While completing his apprenticeship he joined the union movement.

After joining the SPD in 1884, Noske quickly rose through its ranks. He became chairman of the party in Brandenburg in 1892 and, later, worked as editor of two major SPD newspapers.

Noske was elected to the Reichstag in 1906 and became involved in military supply and administration. A member of the SPD’s right-wing, Noske was an enthusiastic supporter of the German war effort, at least initially. He visited the frontline numerous times in the first two years of the war.

By 1917, however, Noske’s confidence in the war and its likely outcomes had cooled. He eventually gave his support to the Reichstag‘s peace resolution in July 1917.

In November 1918, the government took advantage of Noske’s popularity with soldiers and sailors by sending him to deal with the Kiel mutiny. He remained in Kiel for several weeks, gaining the trust of the rebels and limiting their actions.

On his return to Berlin, Noske was appointed as defence minister in the transitional Weimar government. Confronted by the Spartacist uprising in January 1919, Noske personally took charge of the Freikorps militia and marched into Berlin to crush the rebellion.

Noske’s use of the Freikorps increased his unpopularity among socialists in the SPD. He was also accused of authorising or covering up the extra-legal killings of Karl Liebknecht and Rosa Luxemburg.

Noske resigned as war minister in the wake of the Kapp putsch. He became governor of Hanover but played no significant role in national politics. He was stripped of all public offices when the National Socialists (NSDAP) rose to power in 1933.

In 1944, Noske was accused of plotting against Adolf Hitler, arrested and held in Ravesbruck concentration camp. He was liberated by the Allies in 1945 and died in Hanover the following year.