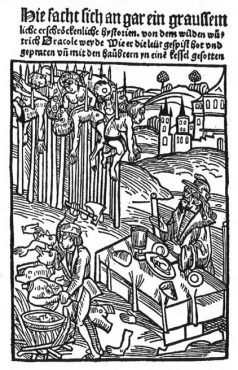 In 1582, residents in a village in Silesia (now Poland) complained of visitations from a bad-breathed vampire with a brow-raising name: Cuntius.

Before joining the ranks of the undead, Johannes Cuntius had been a respected citizen and aldermen in Pentsch. In February 1582, Cuntius was fatally injured after being kicked by one of his “lusty geldings”. Before expiring, Cuntius lingered for several days, complaining of ghostly visions and feeling like he was on fire. According to one witness, at the moment of his death, a black cat entered the room and jumped onto his bed.

As befitted his civic status, Cuntius was entombed near the altar of his local church. But within a few days, several townspeople reported receiving visits from the dead man. All described a “most grievous stink” and “an exceedingly cold breath of so intolerable stinking and malignant a scent as is beyond all imagination and expression”. A whole litany of annoyances and harassments was attributed to the vampire, including accusations of:

After a brief judicial hearing, Cuntius’ body was thrown onto a bonfire and burned, then hacked to pieces and crushed to ashes. As might be expected, the spirit of Cuntius ceased its nocturnal visits. The village of Pentsch became the town of Horni Benesov, the ancestral home of United States presidential candidate and former Secretary of State, John Kerry.

Source: Various inc. Henry More, An Antidote against Atheism (Book III), 1655. Content on this page is © Alpha History 2020. Content may not be republished without our express permission. For more information please refer to our Terms of Use or contact Alpha History.

Pope Alexander VI (ruled 1492-1503) was one of the worst-behaved pontiffs in the long history of the Catholic Church. Rodgrio Borgia was born in 1431 to the powerful Valencian clan that dominated Italian politics during the Renaissance. When his uncle Alfons became Pope Callixtus III in 1455, Rodrigo entered the church and became a cardinal, despite having a law degree and no clerical or theological training.

Rodrigo continued to benefit from a string of nepotistic appointments from his powerful uncle. He eventually bribed his way to the papacy, becoming Alexander VI in 1492. One of his first moves was to make his 17-year-old son, Cesare, an archbishop. Alexander VI also had a reputation for sexual excess: he had several mistresses and fathered at least a dozen children, including the notorious Lucretia Borgia.

“On the last day of October, [the pope’s son] Cesare Borgia arranged a banquet in his chambers in the Vatican with 50 honest prostitutes, who danced after the dinner with those present, at first in their garments, then naked. After dinner, the candelabra were taken from the tables and placed on the floor and chestnuts were strewn around, which the naked prostitutes picked up, creeping on hands and knees between the chandeliers, while the Pope, Cesare and [the pope’s daughter] Lucretia Borgia looked on. Finally, prizes were announced for those who could perform the act [of sexual intercourse] most often with the courtesans, such as tunics of silk, shoes, barrets and other things.”

Just a few days later, the pope and his daughter Lucretia entertained themselves by watching papal stallions mate with a farmer’s mares:

“On Monday the 11th of November, a peasant leading two mares laden with wood entered the city. When they arrived in the place of St. Peter the Pope’s men ran towards them, cut the saddle bands and ropes, threw down the wood and led the mares to a small place inside the palace… There four stallions, freed from reins and bridles, were sent from the palace. They ran after the mares and with a great struggle and noise, fighting with tooth and hoof, jumped upon the mares and mated with them, tearing and hurting them severely. The Pope stood together with Lucretia under a window… both looked down at what was going on there with loud laughter and much pleasure.”

Source: Chronicles of Johann Burchard, Ceremoniere to Pope Alexander VI, 1501. Content on this page is © Alpha History 2016. Content may not be republished without our express permission. For more information please refer to our Terms of Use or contact Alpha History.

John Pinkerton (1758-1826) was a Scottish explorer and cartographer, best known for his 1808 atlas which updated and greatly improved many 18th century maps. He was also a prolific writer of histories and travelogues. In 1814, Pinkerton published a volume summarising his “most interesting” voyages and travels in various parts of the world. One of these chapters described the people of Tibet and their devotion to its political and spiritual leader, the Dalai Lama:

“…The grandees [nobles] of the kingdom are very anxious to procure the excrements of this divinity, which they usually wear about their necks as relics… The Lamas make a great advantage [by] helping the grandees to some of his excrements or urine… for by wearing the first about their necks, and mixing the latter with their victuals, they imagine themselves to be secure against all bodily infirmities.”

Pinkerton also claimed that Mongol warriors to the north:

“…wear his pulverised excrements in little bags about their necks as precious relics, capable of preserving them from all misfortunes and curing them of all sorts of distempers.”

Source: John Pinkerton, A General Collection of the Best and Most Interesting Voyages and Travels, London, 1814. Content on this page is © Alpha History 2016. Content may not be republished without our express permission. For more information please refer to our Terms of Use or contact Alpha History.

In November 1891, William Flower, a Swansea picture framer, appeared before a local magistrate charged with:

“…willfully exposing in his window, or other part of his shop, certain obscene pictures… suggestive of love-making on the part of the Roman Catholic priesthood”.

Flowers pleaded not guilty but was convicted and fined 40 shillings plus costs. A press report of the case described the drawings or cartoons displayed in Flower’s shop and later deemed obscene by the court:

“One represents a priest ear-holding a man, who has pushed aside a curtain and is rapturously gazing at a buxom servant tying her garter. In the companion picture… the same healthy-looking priest has his arm around the generous waist of the maid… All the figures are decently dressed and neither can anything be found of a suggestive character.”

Further investigations by the press revealed that a Catholic clergyman, Canon Richards, had noticed the cartoons on his daily walk. He immediately reported them to the police and pushed for charges to be laid. Flower said he intended to appeal the conviction and had received donations from locals to help meet his costs.

Source: The Western Mail, Cardiff, November 18th 1891. Content on this page is © Alpha History 2016. Content may not be republished without our express permission. For more information please refer to our Terms of Use or contact Alpha History.

Eudes Clement was a prominent French cleric in the early 13th century. Eudes was born into a prominent family in Normandy sometime in the 1190s. He entered the clergy in his late teens and later become the abbot of Saint-Denis. Eudes also became a close friend and advisor to Louis IX, after he purportedly saved the king from a deadly illness by hauling the corpses of saints out of their tombs.

In 1245, Eudes was ordained as archbishop of Rouen, a diocese in Normandy known for its corruption and lack of discipline among both the higher and lower clergy. Eudes spent several months travelling across the diocese, carrying out surprise visits on its parishes and monasteries and keeping a register of transgressions.

The nuns at St Armand de Rouen came in for strong criticism from Eudes. According to his register, they sang hymns and prayers “with too much haste and jumbling of the words”, they received wine in unequal amounts and they slept in their underwear rather than their habits.

More serious clerical misbehaviour was uncovered at Ouville, where Eudes found that:

At Jumieges, the archbishop found two monks, both named William, guilty of committing sodomy with each other; he ordered their removal to separate monasteries. A number of other monks were placed on notice and threatened with expulsion if they transgressed again. Brother Geoffrey of Ouville was one of these given a ‘last chance’; he had fathered a son with the wife of Walter of Ecaquelon. William of Cailleville was placed on notice for his frequent drunkenness.

The parish priest at Ermenouville was warned for having sexual relations with a local woman. Another cleric:

“…the priest of Saint Vaast de Dieppedale confessed that he was guilty of playing ball games in public, and that in this game one of the players had been injured… he swore before us that if he was found to have acted thus again, his parish would be resigned from that time on.”

Source: Register of Eudes, Archbishop of Rouen, ent. July 1248, September 1248, January 1249. Content on this page is © Alpha History 2016. Content may not be republished without our express permission. For more information please refer to our Terms of Use or contact Alpha History.