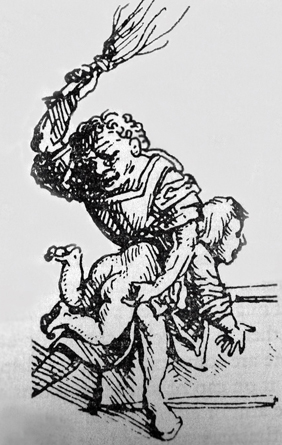 In 1891, English social reformer Henry Salt and several friends set up the Humanitarian League. Active for almost 30 years, the League waged energetic campaigns against animal cruelty, including vivisection, slaughterhouse practices, the fur trade, and blood sports like fox-hunting and deer-stalking.

Salt and his collaborators also lobbied for an end to war and militarism, police brutality and corporal punishment in schools, prisons and the military. In the first years of the 20th century, the League demanded an end to corporal punishment in the Royal Navy, particularly its use of “birchings” or “the cuts” (whippings with bundles of twigs). The Navy authorised and carried out hundreds of birchings every year, mostly on young cadets and junior sailors. It was a punishment that combined intense pain and bloodletting with public humiliation and an awkward sexual undertone:

“The offender is strapped hand and foot… over the breech of a small gun, his trousers are allowed to fall below the knees. A broad canvas is passed around the middle of his body, and his clothing is strapped up, leaving thighs and buttocks perfectly nude… The strokes are deliberately delivered on the bare flesh, not in rapid succession but with a slight pause between each stroke, making the torture and agony of as lengthy a duration as possible. With each stroke, the flesh is seen to turn red, blue and black with bruising. After six or eight strokes the skin usually breaks and copious streams of blood trickle down the unhappy victim’s legs… Splinters of broken birch, wet with blood, whizz and fly in all directions – and not infrequently the exuding excrement of the sufferer…”

Between 1900 and 1905 newspaper correspondents argued ad nauseum over the merits of corporal punishment. In a letter to The Times one flag officer, Vice Admiral Penrose Fitzgerald, described the anti-birching campaign as “nonsense”. “British youths have been birched and caned from time immemorial,” said the admiral, “and yet the race has not turned out badly on the whole”.

On the other hand, the public was frequently shocked by graphic accounts of naval birchings and canings. In January 1905 Salt’s journal, The Humanitarian, published an eye-witness account of a Royal Navy birching ‘gone wrong’. When one bircher failed to incite his victim to screams, he became overzealous, aimed ‘up and under’, and landed his birch on a particularly delicate part of the anatomy:

“Towards the completion of the number of strokes, the corporal [carrying out the birching] began to be anxious for his reputation, so he resorted to the unfair and terrible ‘upward’ stroke, but his aim was not true. The poor fellow gave a yell which I shall never forget and fainted at once… Until he had been surgically examined there was no anxiety, but when it was known that no permanent injury had been inflicted, the matter became one for jest among those sufficiently lost to all sense of decency.”

Fortunately, the Humanitarian League’s campaign did have some effect. In 1906 the Royal Navy outlawed the use of the birch, replacing it with a single cane. Under new regulations, canings could only be distributed after a formal hearing and were no longer carried out in public. By the 1930s there were few canings carried out on seagoing ships. Caning continued to be used on young naval trainees until 1967 when it was abolished altogether.

Sources: The Humanitarian, January 1905 and March 1905. Content on this page is © Alpha History 2016. Content may not be republished without our express permission. For more information please refer to our Terms of Use or contact Alpha History.