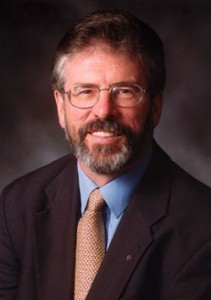 Gerry Adams was born into a Catholic-Republican family in Belfast; his father and grandfather had served in the IRA and Irish Republican Brotherhood (IRB) respectively. He lived in West Belfast and attended St Mary’s Christian Brothers, a Catholic primary school on the Falls Road. Adams left school at 17 and worked as a barman. He became interested in Republican politics, joining Sinn Fein and the Northern Ireland Civil Rights Association (NICRA) in 1967.

IRA member or not?

Many sources – including high ranking IRA volunteers – have identified Adams as a member of the Provisional IRA and, from the early 1970s, one of the group’s commanders. Adams has always denied formal membership of the IRA, describing his role as a negotiator or go-between. Unionists and security forces certainly considered Adams an IRA lynchpin, interning him three times between 1972 and 1978.

Provisional IRA member or not, Adams represented the ‘Provos’ several times. In July 1972 he was released from internment to participate in secret talks between the Provisional IRA and Secretary of State William Whitelaw, travelling alongside Martin McGuinness, Seán Mac Stíofáin and Seamus Twomey. These talks produced a ceasefire that lasted just two weeks. Adams was re-arrested in July 1973, interned then sentenced to 18 months in HM Prison Maze. He was released in 1976.

Adams emerged as a significant policymaker in the wake of the 1981 prison hunger strikes, advocating the ‘Armalite and ballot box’ strategy. He was twice elected to the British parliament as the member for West Belfast (1983, 1987), however, in line with Sinn Fein policy, he abstained from taking his seat. Adams also rose through the ranks of Sinn Fein, becoming its vice president in 1978 and its president in October 1983. Six months later members of the Ulster Freedom Fighters (UFF) attempted to assassinate Adams in Belfast. He was shot three times but survived.

By the mid-1980s, Gerry Adams had become the public face of Sinn Fein, and indeed of Irish Republicanism. The Thatcher government responded by censoring British television and radio, imposing a ban on broadcasting Adams’ voice (November 1988).

Adams also embarked on a new strategy. He argued that Sinn Fein’s abstentionism should be wound back, to allow the party’s elected members to sit in the Irish Dáil Éireann. In 1988 Adams held talks with Social Democratic and Labour Party (SDLP) leader John Hume; these talks and their 1993 resolutions were an important step in the peace process. During the 1990s, Adams managed Sinn Fein’s transition from the political wing of the IRA into a legitimate political party. He was also a key figure in the Northern Ireland peace process, holding together Republican groups to secure the 1998 Good Friday Agreement.

Today, Gerry Adams is considered one of the architects of peace in Northern Ireland, though he is viewed with derision by Loyalists (who do not forget his links to the IRA) and extremist Republicans (who believe Adams ‘sold out’ Republican values). Adams remains active on the political scene. He served in the Northern Ireland Assembly between June 1998 and December 2010 but rejected a role in the executive, instead nominating his friend Martin McGuinness. Adams was also an elected member of the British House of Commons for 25 years, though he never took the oath of loyalty or occupied his seat. In 2011 Adams resigned his Westminster seat to run for the Dáil Éireann. He continues to hold this seat and the Sinn Fein presidency today.