John Hume (1937-2020) was a Nationalist politician and a founding member of the Social Democratic Labour Party (SDLP). He is best remembered for his role in negotiating and securing peace in Northern Ireland. 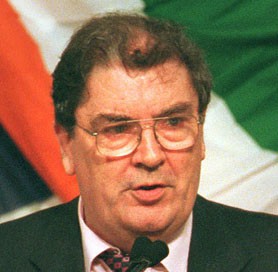 Hume was born into a poor working-class Catholic family in the Bogside area of Derry. Educated at St Columb’s College, Hume spent some time preparing to enter the Catholic priesthood before settling on a career in teaching.

While working as a teacher Hume became involved in the civil rights movement. He avoided marches and protests, preferring to work for improved conditions, particularly in his hometown of Derry.

In the late 1960s, Hume fronted a citizen’s action committee, helped found a credit union and lobbied for the commissioning of a university in Derry.

In 1969, he was elected to the Northern Ireland Parliament as a Nationalist candidate, representing the seat of Foyle. The following year, Hume and several other MPs combined to form the SDLP. He would remain an influential figure in this party, eventually becoming its leader in 1979.

In 1971, Hume protested against internment by participating in a two-day hunger strike, along with other MPs. He also launched a successful legal challenge against anti-assembly laws being used in Northern Ireland.

Hume was an important figure in the failed power-sharing governments of the mid-1970s. He was elected to the Northern Ireland Assembly in 1973 and participated in the 1975 Constitutional Convention. Hume was also elected to the European Parliament in 1979 and the Westminster seat of Foyle in 1983.

Role in the peace process

John Hume is widely credited with masterminding the Northern Ireland peace process during the late 1980s and 1990s. He undertook a series of secret meetings with Gerry Adams in 1988, encouraging Sinn Fein to convince the Provisional IRA to renounce violence in favour of a political solution. This was an important factor in the Provisional IRA’s 1994 ceasefire.

Hume participated in the Good Friday talks and signed the final agreement, on behalf of the SDLP, in 1998. Later that year he was awarded the Nobel Prize, an honour he shared with Unionist politician David Trimble.

Hume remained active in politics until his retirement in 2005. He was later diagnosed with dementia and died in a Derry nursing home in August 2020, aged 83.