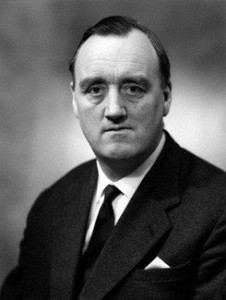 William Whitelaw (1918-1999) was a British politician who served as Secretary of State for Northern Ireland from the imposition of Direct Rule in March 1972 until December 1973.

Whitelaw was born in Edinburgh, the son of a World War I veteran who died shortly after his birth. The Whitelaws were prominent in the Conservative Party, his grandfather and great-grandfather both serving as Members of Parliament. Willie, as he became known, was educated at Winchester College and Cambridge, studying history and law. He joined the Scots Guards and served with distinction during World War II, seeing combat in France and the Middle East. He returned home in 1946 to manage the family estates.

Whitelaw twice ran unsuccessfully for parliament in 1950 and 1951. In 1955 he was elected to Westminster, representing the seat of Penrith. Whitelaw came to be seen as an approachable and efficient administrator. He served for several years as the Conservative Party’s chief whip and, later, leader of the House of Commons.

When Direct Rule was imposed in March 1972, Whitelaw was appointed as the first Secretary of State for Northern Ireland. His approachability and conciliatory methods were seen as valuable tools for resolving the crisis. Whitelaw sought to build bridges with the Catholic community while opening up negotiations with both factions of the Irish Republican Army (IRA). His decision to grant Special Category Status (SCS) to Republican prisoners helped secure ceasefires with the Official IRA and Provisional IRA in mid 1972. These measures saw angry Loyalists dub him ‘Willie Whitewash’.

Whitelaw also took tough action, however, ordering British troops into Nationalist ‘no go areas’ (Operation Motorman, July 1972) and authorising the use of jury-less Diplock courts. In 1973 Whitelaw had a leading hand in developing the Sunningdale Agreement, which created a power-sharing executive government and a carefully elected assembly.

Whitelaw was relieved of his duties in Northern Ireland after the signing of the Sunningdale Agreement. He later served as employment minister, Conservative Party chairman, shadow Home Secretary and de facto deputy leader under Margaret Thatcher. Whitelaw received a peerage in 1983 and sat for several years in the House of Lords. He resigned from politics in 1987 following a period of ill health, passing away at his Penrith home in 1999, aged 81.