Margaret Thatcher (1925-2013) was a British politician, Conservative Party leader and prime minister for 11 years during the Troubles. 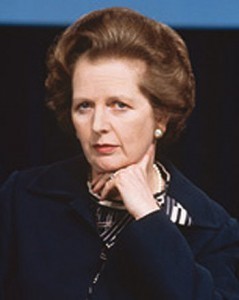 Thatcher was born Margaret Roberts in northern England, the daughter of a shopkeeper. She attended Oxford University, studying chemistry and graduating with a science degree, before commencing studies in law. She joined the Conservative Party, married Denis Thatcher in 1951 and commenced practice as a barrister in 1954.

After one unsuccessful candidacy Thatcher was elected to the British House of Commons in 1959. Despite her gender, relative youth and political inexperience she rose quickly through the ranks of the party, acquiring a reputation as a forceful and effective operator. Thatcher became the leader of the opposition in 1975 and Britain’s first female prime minister in May 1979.

Thatcher’s attitude to the turmoil in Northern Ireland was stubbornly conservative. She was a staunch supporter of Ulster Unionists and argued that Northern Ireland’s status would never change without support from a majority of the people. Irish Republican terrorism, she argued, was merely the work of thugs. “Crime is crime is crime. It is not political, it is a crime.”

These were hardened by events early in her prime ministership. A month prior to her election Thatcher’s ministerial colleague, Airey Neave, was assassinated by the Irish National Liberation Army (INLA). Three months after taking power, she also had to deal with the assassination of Lord Louis Mountbatten.

Thatcher offered no concessions to Irish Nationalists and refused to reinstate Special Category Status (SCS) to Republican prisoners, describing them as “criminals and criminals only”. Thatcher’s stubbornness during the 1981 prison hunger strike was seen as strength by some but callous indifference by others. She moved to “deny terrorists the oxygen of publicity on which they thrive” by imposing a nationwide broadcast ban on Sinn Fein and other Republican groups. Irish Republicans, understandably, came to despise Thatcher, one calling her “the biggest bastard we have known”.

In October 1984, the Provisional IRA made an attempt on Thatcher’s life by bombing a Conservative Party conference in Brighton. Thatcher herself was unharmed but five others, including a sitting MP, were killed.

In 1985, Thatcher signed the controversial Anglo-Irish Agreement. This treaty gave the Republic of Ireland an advisory role in the government of Northern Ireland. Given Thatcher’s earlier position, as well as the attempt on her life the previous year, many were surprised by the agreement’s progressive terms.

Despite this, the Anglo-Irish Agreement did not win Thatcher many friends in Ireland. Ulster Loyalists who feared interference by Dublin condemned it as a betrayal, while Republicans said it did not go far enough. The agreement also caused a rift in Thatcher’s own government and led to the resignation of her treasury secretary, Ian Gow. While the agreement failed to end political violence, it did improve relations between London and Dublin and laid the groundwork for the peace process in the 1990s.

Within Britain, Thatcher remained a divisive and controversial figure due to her economic reforms, her social policies and her management of the 1982 Falklands War. She was reelected in 1987 but her support for a poll tax broadened her unpopularity. Facing a leadership challenge from within the Conservative Party, Thatcher resigned the prime ministership in November 1990. She remained in the House of Commons until the general election in April 1992.

Thatcher was given a life peerage and sat in the House of Lords as Baroness Thatcher. She died in April 2013, aged 87, after suffering health problems for several years.