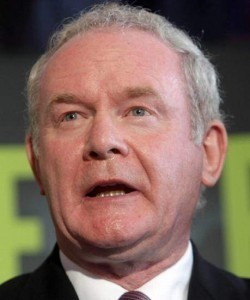 One of seven children from a Catholic family in Derry, McGuinness left school at age 15 and obtained work with a local butcher. When the Troubles erupted in 1969 McGuinness joined the Official IRA, switching to the Provisional IRA after the factional split in late 1969.

Despite his youth, McGuinness soon became an important commander. When Bloody Sunday occurred in January 1972 he was the Provisional IRA’s second in command in Derry. In July that year, McGuinness represented the Provisional IRA at secret talks in London. In 1973, he was arrested in the Republic of Ireland and jailed for six months, after being found driving a car loaded with firearms and explosives.

During the 1970s McGuinness became more prominent in Sinn Fein, though he retained his membership of the Provisional IRA. Increasingly associated with Gerry Adams, he helped formulate Sinn Fein’s political strategy during the 1980s. McGuinness also retained contact with British intelligence agents. He was elected to the Northern Ireland Assembly in 1982, though he abstained from taking up his seat, in line with Sinn Fein policy. McGuinness was also elected to the British parliament in 1997.

The following year he was Sinn Fein’s lead negotiator during meetings that culminated in the Good Friday agreement. In 1999 McGuinness was appointed Minister for Education in the Northern Ireland executive. This shocked many Unionists, concerned that a former IRA commander was responsible for the education of their children. In fact, McGuinness’ involvement in the peace process and post-Good Friday government remained a sore point with many unable to forgive or forget his previous affiliations.

In 2007m McGuinness was elected First Minister of Northern Ireland, alongside Protestant firebrand Ian Paisley. Despite their conflicting political views McGuinness and Paisley formed a productive working relationship and a personal friendship. They were even dubbed the ‘Chuckle Brothers’ by the press, a reference to their jocularity during press conferences.

McGuinness remained First Minister until his retirement due to ill health in January 2017. He died two months later. McGuinness’ funeral was attended by scores of politicians and dignitaries including Gerry Adams, Bill Clinton, Bertie Ahern and John Hume.