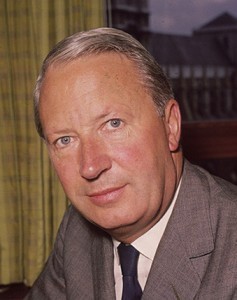 Edward Heath (1916-2005), also known as Ted Heath, was a Conservative Party politician who served as British prime minister between 1970 and 1974, the worst period of the Troubles.

Heath was born in a working class family from Broadstairs, Kent, his father a builder and his mother a domestic servant. Ted Heath was educated in Ramsgate and did well enough to obtain a scholarship to Oxford. He studied philosophy, politics and economics, graduating with a degree in 1939. Heath travelled across Europe during study breaks, including visits to Nazi Germany, where he reportedly met leading Nazis like Heinrich Himmler and Joseph Goebbels.

Heath joined the Army in March 1941 and served with distinction as an artillery officer during World War II, leaving the service as a lieutenant colonel. In 1950 he ran for the House of Commons, narrowly winning the seat of Bexley. He was promoted to cabinet in 1959 and held several portfolios, before becoming the leader of the Conservative Party in July 1965.

Heath became prime minister after a Conservative election victory in June 1970. As premier he became chiefly concerned with economic reforms, particularly managing Britain’s entry into the European Common Market. Heath often seemed disinterested in Northern Ireland, looking on its political issues and sectarianism with ambivalent distaste. He had no affection for the Loyalist cause and his working relationship with Unionist politicians like Brian Faulkner was strained.

The Bloody Sunday shootings in January 1972 moved Northern Ireland to the top of Heath’s agenda. Frustrated by Faulkner’s intransigence, Heath authorised the imposition of Direct Rule in March 1972. His government favoured a negotiated peace agreement based on power-sharing and cooperation with Dublin. Heath trusted this to his subordinate William Whitelaw, though Heath was partly involved in December 1973 talks that culminated in the Sunningdale Agreement.

Heath was never widely popular with the British people, who thought him too cold and elitist in spite of his working-class origins. Heath and the Conservatives lost power in the February 1974 election, the prime ministership passing to Labour’s Harold Wilson. Heath remained in parliament another 27 years, finally retiring in June 2001. He was not considered for another cabinet portfolio, due to his poor relationship with Margaret Thatcher.

In January 2003, Heath gave evidence before the Saville Inquiry into Bloody Sunday, one of his last significant public acts. He became seriously ill later that year and died in March 2005, aged 89.