Isaac Rene Le Chapelier (1754-1794) was a lawyer and moderate revolutionary politician, best known for the 1791 law that carried his name. 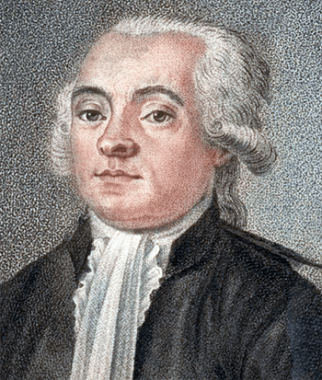 Born in Britanny in western France, Le Chapelier completed a law degree, following in the footsteps of his prominent father.

In 1789 he was elected by his bailiwick to represent the Third Estate at the Estates-General. Le Chapelier backed voting by head, participated in the Tennis Court Oath and supported the formation of a National Assembly. He exerted considerable influence within the National Constituent Assembly, serving briefly as its president and chairing the sessions that produced the August 4th decrees.

Le Chapelier proposed the abolition of noble titles, supported the nationalisation of church lands and was involved in drafting the Constitution of 1791. He was also a foundation member and the first president of the Breton Club, which became the Jacobin Club in late 1789.

Like several other members of the haute bourgeoisie, Le Chapelier was radical in 1789 but barely moderate by 1791-92. He believed that political clubs and other groups would fade away once the Constitution of 1791 had been implemented, marking the end of the French Revolution.

In June, Le Chapelier introduced a bill that was subsequently passed by the National Constituent Assembly. The “Le Chapelier Law“, as it became known, banned workers from striking or forming guilds or associations. Le Chapelier’s bill was not about suppressing wage claims, as is often alleged. Instead, it was aimed at preventing the formation of large guilds, unions or political parties that might exert excessive influence on the government. “There is nothing more than the private interest of each individual and the general interest”, Le Chapelier said of his bill. “It is not permitted to inspire citizens… to separate them from the republic through a spirit of corporation.”

As might be expected, Le Chapelier’s bill was extremely unpopular among the urban workers of Paris and other departments. Le Chapelier himself moved further to the right after the Champ de Mars Massacre, abandoning the Jacobins and joining Antoine Barnave‘s Feuillants Club.

Le Chapelier made one final attempt to curtail the growing power of radical political clubs. In September 1791, during the final sessions of the National Constituent Assembly, he argued that the revolution was ‘over’ and that the Jacobins had outlived their usefulness to the state. At Le Chapelier’s behest, the Assembly passed a decree banning clubs from lobbying and other types of political activity, though most simply ignored this.

As a constitutional monarchist, Le Chapelier became a target for threats and recriminations. He fled to Britain in 1793 but returned to France the following year to reclaim his property. Le Chapelier was arrested, tried by the Paris Revolutionary Tribunal and guillotined in June 1794.

A historian’s view:
“Had the Le Chapelier Law been seen as a way of protecting the rich against the poor, or the propertied against the property-less, it would have met with strenuous opposition by one of the Assembly’s defenders of the poor. [But] the law was passed without opposition because it seemed evident to the entire National Assembly that the reconstitution of corporations in any form was a fundamental threat to the nation and its free constitution… The law made it clear that… no intermediary body could stand between the individual – now armed with his natural rights – and the nation – now the guarantor of natural rights.”
William H. Sewell, historian

Citation information
Title: “Isaac Le Chapelier”
Authors: John Rae, Steve Thompson
Publisher: Alpha History
URL: https://alphahistory.com/frenchrevolution/isaac-le-chapelier/
Date published: May 11, 2017
Date accessed: December 05, 2022
Copyright: The content on this page may not be republished without our express permission. For more information on usage, please refer to our Terms of Use.