Tony Blair (1953- ) was a British Labour politician, prime minister between May 1997 and June 2007 and a key figure in the Northern Ireland peace process. 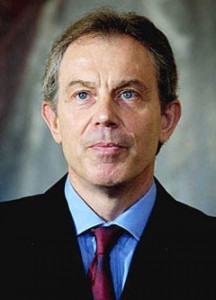 Blair’s father Leo was a lawyer, academic and aspiring conservative politician; his mother Hazel came from an Irish Protestant family. Tony Blair was educated in Adelaide (Australia), Durham and Edinburgh, then completed a law degree at Oxford. Then a self-declared socialist, Blair joined the Labour Party in 1975. He ran unsuccessfully for parliament in 1982 but the following year was elected to represent the seat of Sedgefield.

Blair ascended quickly through the Labour Party hierarchy, earning front bench appointments and a shadow ministry. He also appeared regularly in the media and was hailed as a key member of Labour’s new guard. When Labour leader John Smith died in 1994 Blair, then just 41, was elected to replace him.

Under Blair’s youthful and vigorous leadership the party rebranded itself as New Labour. In May 1997 Blair and Labour were swept to victory over the unpopular John Major-led Conservatives, winning 418 seats to 165.

As prime minister, Blair vowed to build on Major’s work in bringing peace to Northern Ireland. The Labour government focused more on Northern Ireland than its predecessors and Blair involved himself more directly than previous prime ministers. The Provisional IRA responded by announcing its second ceasefire in July 1997, two months after Blair’s election.

In October, Blair travelled to Belfast and became the first British premier to meet with leaders of Sinn Fein. These first meetings with Gerry Adams, Martin McGuinness and others were awkward – but they established the groundwork on which future peace negotiations could proceed.

Blair forged a strong working relationship with Irish Taoiseach Bertie Ahern, whose involvement in the peace process he considered important. He also announced a new investigation, the Saville Inquiry, into the events of Bloody Sunday.

These discussions culminated in the Belfast peace talks and the Good Friday Agreement (April 1998). Blair then campaigned energetically for the ratification of the agreement. He made five critical promises to voters in Northern Ireland: self-determination, devolution, equality, the exclusion of violent groups from the political process and no early release for prisoners unless the violence ended. The referendum succeeded, though Loyalists later accused Blair of reneging on some of his promises. This, along with disputes over decommissioning, caused Northern Ireland’s post-Good Friday government to falter.

Tony Blair resigned as prime minister in June 2007 and left the House of Commons shortly after. He became a United Nations peace envoy specialising in the Middle East, a position he held until 2015. Blair has also worked as an advisor to the banking and corporate sector, and at one point was the world’s highest paid public speaker.

Assessments of Blair’s leadership are polarised. No British prime minister did more to secure peace in Northern Ireland, though many condemn Blair for involving Britain in the poorly justified invasion of Iraq in 2003.