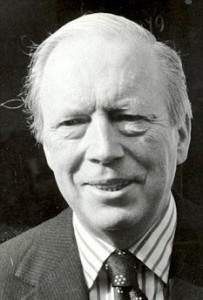 Airey Neave (1916-1979) was a British military veteran and Conservative politician, assassinated by the Irish National Liberation Army (INLA) in 1979.

Neave was born in London, the son of a prominent naturalist who specialised in the study of insects. He was educated at Eton before studying law at Oxford. He enlisted as a reservist in 1935 and transferred to the military when World War II broke out. Neave saw combat as an artillery officer but was seriously wounded and captured in 1941. The following year he broke out of the notorious Colditz Castle (one of very few prisoners to do so) and returned to England. Neave was later decorated for his heroism and ingenuity.

Back in England, Neave was recruited by MI9, a military intelligence group that supported resistance fighters and escaped POWs. After two unsuccessful election tilts Neave won a seat in the House of Commons in June 1953.

Neave had ministerial ambitions but they were thwarted by internal politics, as well as a heart attack he suffered in 1959. In the early 1970s, he threw his weight behind aspiring Conservative leader Margaret Thatcher. Neave became one of her most important advisors and political agents, helping to orchestrate Thatcher’s rise to the party leadership.

When Thatcher became party leader in February 1975, she appointed him Shadow Secretary of State for Northern Ireland. Neave rejected devolution, power-sharing and political negotiation with Republicans and Nationalists; he believed that Republican paramilitaries could be targeted and wiped out using intelligence and military strategy. Neave was also an integrationist who was prepared to govern Northern Ireland from London if it became ungovernable in Belfast.

By early 1979, it seemed clear that Thatcher would win the forthcoming general election and Neave would become her Secretary of State for Northern Ireland. Neave’s political views, along with his experience and skill in military intelligence, made this a dangerous proposition for Republican paramilitary groups.

Five weeks before the election Neave was killed by an INLA car bomb as he drove out of the Parliament car park. He was the first sitting MP to be assassinated since Sir Henry Wilson in 1922 (a victim of the first Irish Republican Army). Neave’s widow was given a life peerage several weeks after his death and later sat in the House of Lords. Airey Neave’s policies, as well as his brutal death, shaped Margaret Thatcher’s views on Northern Ireland for the first years of her prime ministership.