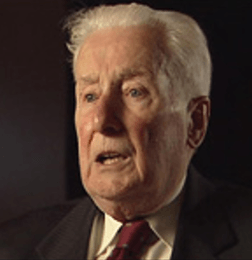 Billy McKee (1921-2019) was a lifelong Irish Republican paramilitary, a founding member of the Provisional IRA and a former hunger striker.

McKee was born into a devout Catholic family in Belfast and joined the Irish Republican Army (IRA) at age 18. He participated in the IRA’s ‘Northern Campaign’, a series of terrorist attacks against British targets during World War II. McKee was arrested in 1943 and held in Crumlin Road prison for three years. He remained active with the IRA after his release.

McKee was arrested again during the IRA’s Border Campaign against Northern Ireland; he remained in prison until 1962. McKee was based in Belfast during the 1960s. He retained his membership with the IRA but lessened his involvement, discouraged with the IRA leadership and its focus on political reform instead of paramilitary struggle.

McKee returned to the fray in the late 1960s, amid increases in sectarian violence. He and his men attempted to defend Catholic areas from the Royal Ulster Constabulary (RUC) and Loyalist thugs during the rioting of August 1969. McKee criticised IRA leaders for their lack of preparation and planning, particularly a dire shortage of weapons and munitions.

After failing to seize control of the IRA leadership, McKee and his followers formed a splinter group that evolved into the Provisional IRA. From late 1969 to 1971 McKee was in command of the Provisional IRA’s Belfast Brigade. During this period, he led successful defences of Catholic areas from Loyalist attack, at one point being shot five times. McKee was arrested and jailed for firearms offences in 1971. In May-June 1972, he led other prisoners in a successful hunger strike, resulting in the granting of Special Category Status (SCS) for Irish Republican prisoners.

McKee was released in September 1974 and resumed his activities with the Provisional IRA. He was voted out of leadership positions in 1977 and poor health ended his involvement with the IRA. Into his mid-90s, McKee remained an outspoken radical Republican. In media interviews, he criticised the Good Friday peace agreement, Gerry Adams, Sinn Fein and other stakeholders. McKee also refused to apologise or express regret for the Provisional IRA’s killing of civilians during the Troubles.

Billy McKee died in June 2019. His funeral service in Belfast was attended by hundreds of former IRA volunteers.