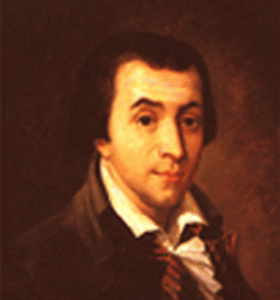 Jacques Brissot (1754-1793) was the figurehead and de facto leader of the Girondinist bloc which dominated France’s government in 1792-93.

Born in Chartres, Brissot was the 13th son of an innkeeper but nevertheless managed to receive a good education. The teenage Brissot showed some interest in becoming a lawyer, taking up employment at a Paris legal firm.

By adulthood, Brissot was less interested in law than in writing, following a course previously charted by the likes of Voltaire and Rousseau.

In the 1780s, Brissot toured England, in part to undertake studies of its political system and social classes. His written comparisons, which were critical of France and favourable towards Britain, were not well received back home; on his return he was imprisoned briefly in the Bastille.

In 1788, Brissot became a foundation member of an abolitionist society seeking an end to slavery in the colonies. In May 1789, he founded a newspaper, Le Patriote Francais, which later served as the main organ for the Girondins.

An outstanding public speaker, Brissot was chosen as a deputy to both the Legislative Assembly and the National Convention. The radicalism of August 1792 prompted a split between Brissot and his followers, and members of the Jacobin movement.

In 1793, Brissot launched stinging attacks against the Jacobins, the Paris Commune, the city’s sections and radical journalists, claiming they were divisive and anarchistic. He was arrested in June 1793 and guillotined five months later.

Citation information
Title: “Jacques Brissot”
Authors: John Rae, Steve Thompson
Publisher: Alpha History
URL: https://alphahistory.com/frenchrevolution/jacques-brissot/
Date published: May 16, 2017
Date accessed: January 20, 2022
Copyright: The content on this page may not be republished without our express permission. For more information on usage, please refer to our Terms of Use.