Voltaire (1694-1778) was the pen-name of François-Marie Arouet, the Enlightenment philosopher, writer and critic of the Ancien Régime. Like most of the other philosophes, Voltaire was dead well before the French Revolution was in full swing – however, his writings shaped revolutionary ideology and, to some extent, the course of the revolution. 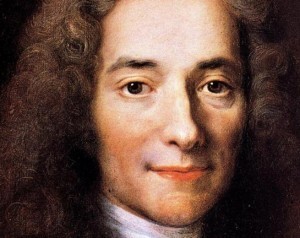 As a young man, the Paris-born Voltaire chose not to follow his father into law, opting for a writing career instead. Within a few years, he had attracted controversy and condemnation, both for his criticism of the church and the Ancien Régime, and his barbed commentary about powerful individuals.

In 1726, Voltaire was beaten up, arrested and exiled to England by lettre de cachet after insulting a nobleman. Rather than thinking of this as a punishment, Voltaire used the experience to study British government, society and attitudes to religion. He found the British system much more enlightened than that of the Ancien Régime.

Voltaire returned to France in 1729 and began writing on a broad range of topics, including history, philosophy, poetry and the arts. He used fictional works to criticise and condemn the existing order, using his characters to express what he was thinking.

Voltaire’s favourite target was religion. He accepted the existence of God but railed against the divine right of kings, religious dogma, superstition, the profligacy and corruption of the higher clergy, and the Church’s failures to minister to the poor.

Voltaire’s most famous work is the 1759 novel Candide, which sarcastically took aim at the upper classes and their willful ignorance of the sufferings of those below them.

Citation information
Title: “Voltaire”
Authors: John Rae, Steve Thompson
Publisher: Alpha History
URL: https://alphahistory.com/frenchrevolution/voltaire/
Date published: May 7, 2017
Date accessed: August 17, 2022
Copyright: The content on this page may not be republished without our express permission. For more information on usage, please refer to our Terms of Use.