Jean-Jacques Rousseau (1712-1778) was a Swiss philosopher and a pivotal figure of the European Enlightenment. The French Revolution was shaped more by Rousseau’s ideas than by the works of any other figure. 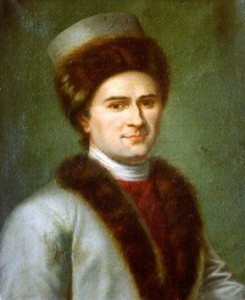 Rousseau was born in Geneva, where he was raised and educated by his father, a skilled clockmaker. After a number of different jobs and failed apprenticeships, he moved to Paris at age 30, taking up employment as a government official while studying political philosophy in his spare time.

Rousseau made several contributions to Denis Diderot‘s Encyclopédia and in 1750 won a major essay competition, after which he returned to Geneva and began writing in earnest.

In 1762, Rousseau published two of his best known books: The Social Contract and Emile.

The Social Contract was a philosophical discourse on the relationship between government and individuals. It suggested an unwritten contract between people and the state. It also contained the immortal line “Man is born free yet everywhere he is in chains”. Emile continued on the same theme while considering how individuals should be educated to become better citizens.

These works thrust Rousseau into the public arena – but his strong criticisms of royalty, aristocracy and religion also saw him hounded out of Geneva. He returned to France, where he lived out the remainder of his years.

Rousseau was dead long before the tumultuous events of 1789, however, his writings and ideas about government, society and individual liberties underpinned French revolutionary ideas and inspired some of the revolution’s leading figures, from Jean-Sylvain Bailly to Maximilien Robespierre.

Citation information
Title: “Jean-Jacques Rousseau”
Authors: John Rae, Steve Thompson
Publisher: Alpha History
URL: https://alphahistory.com/frenchrevolution/jean-jacques-rousseau/
Date published: May 7, 2017
Date accessed: July 02, 2022
Copyright: The content on this page may not be republished without our express permission. For more information on usage, please refer to our Terms of Use.