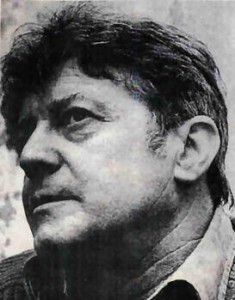 Cathal Goulding (1922-1998) was an Irish Republican Army (IRA) chief of staff during the 1960s. He later became the leader of the Official IRA.

Goulding was born in East Arran Street, Dublin, and raised in a Catholic family with generations of involvement in Irish Republicanism. Goulding joined the IRA shortly after his 16th birthday, while training as a painter and decorator. In 1940 he was arrested for attempting to steal ammunition and interned in Curragh until 1945. Goulding was arrested for another arms raid in 1953, this time in England. He was arrested alongside Seán Mac Stíofáin, who later split with Goulding to form the Provisional IRA.

Goulding spent the next eight years in an English prison. On returning to Ireland, he became the IRA’s quartermaster general (1959) and chief of staff (1962). He was arrested and jailed briefly in 1966, after being arrested for carrying a pistol and 3,000 bullets.

Goulding is best remembered for intellectualising and politicising the IRA. During the 1960s he studied left-wing politics and Marxist revolutions, such as the Russian Revolution. Goulding came to embrace a socialist interpretation of the problems in Northern Ireland. He believed that sectarian divisions were encouraged by the capitalist elite, in order to distract and control the working classes. Catholic and Protestant workers, Goulding believed, should unite to struggle against British imperial power.

Under Goulding’s leadership, the IRA prioritised political activism over military action; its focus broadened from anti-British slogans to anti-imperialism and anti-capitalism. This shift alienated some IRA members, such as Mac Stíofáin and Billy McKee, who complained that Goulding talked too much but acted too little. These divisions contributed to the formation of the Provisional IRA in December 1969.

Goulding remained leader of the Official IRA until 1972. During this period the group engaged in some violence, much of it against their rivals in the Provisional IRA. The Official IRA’s disastrous retaliations for Bloody Sunday, most notably the bombing of Aldershot bombing that killed seven civilians, contributed to a May 1972 ceasefire and Goulding’s resignation as leader. Goulding then devoted his time to the Workers’ Party of Ireland, a socialist party formed in 1970 after a split with Sinn Fein.

Goulding died from cancer in his native Dublin on Boxing Day 1998.