Bill Clinton (1946- ) was president of the United States from 1993 to 2001 and a significant contributor to the peace process in Northern Ireland. 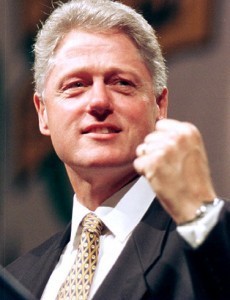 Clinton was born in Arkansas, the son of a single mother. He met John F. Kennedy as a child and later studied at Georgetown, Oxford and Yale. Clinton entered politics as a campaign worker for Democratic candidates. In 1978, he was elected governor of Arkansas at the age of 32. He held this office for 12 years.

Aided and accompanied by his politically astute wife Hillary, Clinton began fundraising and preparing for a tilt at the US presidency. He became the 42nd president of the United States after defeating incumbent president George Bush Senior in the 1992 election.

The Cold War was over by the time Clinton entered the White House in January 1993. This allowed him more time to focus on regional hot spots like Northern Ireland. Previous US presidents considered the Troubles a domestic issue for the British government – but Clinton took a broader view. Backed by Irish-American groups, the new president assumed an active role in encouraging the peace process.

In November 1995 Clinton became the first serving US president to visit Northern Ireland. During this visit he addressed a large crowd in Belfast, calling for a renewed peace effort and dubbing paramilitary terrorists “yesterday’s men”.

Clinton’s words were accompanied by action. In 1995 he created a new role, the US Special Envoy for Northern Ireland, and appointed retired senator George Mitchell to fill it. The British saw this role as dangerously interventionist, yet Mitchell would play a critical role in establishing the principles on which peace negotiations would be based.

Mitchell chaired the Good Friday negotiations in April 1998 while Clinton worked behind the scenes, speaking with key figures by telephone. Many historians believe Clinton’s active support for the Northern Ireland peace process was integral to its success. By mid-1998, Clinton was distracted by a sex scandal involving former White House intern Monica Lewinsky. Despite this, he found time to visit Northern Ireland in September 1998 and December 2000.