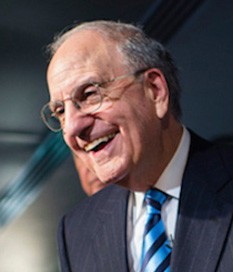 George Mitchell (1933- ) is an American lawyer, politician and diplomatic envoy who oversaw negotiations leading to the Good Friday Agreement.

George John Mitchell was born in Waterville, Maine and raised by a Catholic working-class family. After graduating from high school Mitchell served three years in the United States Army, then completed a law degree at night school. He worked as an attorney for the US State Department before returning to his native Maine. Mitchell stood as a Democratic candidate for the Maine governorship in 1974 and was elected junior Senator for Maine in 1980. He served as Senate majority leader between 1989 and his retirement from Congress in 1995.

During his final years there, Mitchell supported a range of liberal and progressive measures. In 1994 he turned down an offer of appointment to the US Supreme Court to support health care reforms in the Senate.

In December 1994, US president Bill Clinton appointed Mitchell as an advisor on economic initiatives in Ireland. The following month this role was upgraded to US Special Envoy for Northern Ireland, a newly created diplomatic post for assisting the peace process.

Though British leaders initially objected to this intervention, Mitchell soon became a pivotal figure in the peace process. In November 1995 he chaired a committee to investigate and make recommendations on the decommissioning of paramilitary weapons. Mitchell’s report, tabled in February 1996, also suggested a set of six principles on which future peace talks should be based. The Mitchell Principles, as they became known, were an important factor in bringing parties to the peace table.

Between September 1997 and April 1998 Mitchell chaired the negotiations that culminated in the Good Friday Agreement. His determination to keep the talks progressing is often cited as a factor in their success. Mitchell remained involved in the peace process until Clinton left office in January 2011.

Since then, Mitchell has served as chancellor of Queen’s University Belfast, as a member of the 9/11 Commission and as Barack Obama’s peace envoy for the Middle East. He received an honorary British knighthood in 1999.