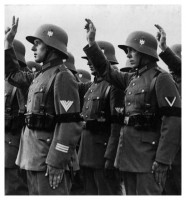 The Reichswehr was Germany’s small but influential regular military during the Weimar period and the first years of the Nazi regime. The relationship between Adolf Hitler, the Reichswehr and its generals became a critical issue in the first years of Nazi rule. Hitler knew that Nazism could not survive without the support of the military so actively courted its support.

The Reichswehr was an important influence on German politics during the Weimar era. The generals of the Reichswehr, most of whom were traditionalist and conservative, generally despised the Weimar constitution and its weak and unstable democratic government. Most were of the Prussian elite so favoured authoritarianism and military participation in government and policy formation.

Many Reichswehr generals also maintained close links with nationalist and paramilitary groups, such as the Freikorps. Because of this, many suspected the Reichswehr would support, or possibly even initiate a counter-revolution against the Weimar Republic.

These fears were placated in 1925 when General Paul von Hindenburg was elected to the presidency. The anti-democrats in the Reichswehr trusted Hindenburg, a respected and adored former military leader, to protect the nation from the excesses of democracy.

The Reichswehr shared many ideas and objectives with the rising National Socialists (NSDAP). Both groups yearned for the restoration of German imperial and military power. Both hated the Treaty of Versailles, the Allied war reparations and the French occupation of the Ruhr. Both craved an authoritarian government, strong enough to protect German sovereignty.

This common ground should have made the Nazis and the Reichswehr political allies or at least sympathetic to each other’s interests. The relationship between the two groups was more complex and problematic.

Hitler did have several admirers in the higher ranks of the Reichswehr but others disliked the Nazi leader. Some of this was snobbery: they saw Hitler as a chest-beat Austrian corporal who had risen above his station. They also considered Hitler an organiser of brawlers, henchmen and street thugs rather than a true leader or military commander.

To many Reichswehr commanders, Hitler seemed likely to be a political flash-in-the-pan who would fall as quickly as he had risen. The strongest of his critics was the Reichswehr commander-in-chief, General Kurt von Hammerstein-Equord, who described the Nazis as a “criminal gang” and “perverts”.

Opposition to the SA

Another pressing concern for Reichswehr generals was the rapid growth of the Sturmabteilung (SA), the Nazi paramilitary group founded in 1921.

Reichswehr officers were alarmed by the radical political rhetoric in SA ranks. Some in the SA began to speak of it as a fledgeling revolutionary army, destined to eventually replace and possibly even do battle with the Reichswehr.

There was also concern about the rapid growth of the SA. By 1932, the SA numbered more than 150,000 men. In comparison, the Reichswehr was limited to just 100,000 men by the Versailles treaty. In the event of a Nazi revolution or civil war, this left the military outnumbered.

For much of 1932, Hitler courted the military for its support, playing down the suggestion that the SA would one day overthrow the government and challenge the military.

In a February 1932 meeting with Reichswehr commanders, Hitler assured them the SA was purely a political and cultural movement: it had no military ambitions or intention to replace the Reichswehr.

At this meeting, Hitler promised the generals that a Nazi-led government would end democracy, re-install authoritarian government, discard the Versailles treaty and expand and re-arm the military.

Reichswehr opposition to the Nazis

Hitler’s pledges earned him cautious support from some but not all Reichswehr leaders. Most notably, Hammerstein-Equord continued to distrust Hitler and lobby against him. In December 1932, during the strife-filled chancellorship of Kurt von Schleicher, Hammerstein-Equord called on Hindenburg and urged him not to appoint Hitler as chancellor. Hindenburg scolded the general for interfering in political matters.

Days after becoming chancellor, Hitler again met with high-ranking military officers and re-affirmed his commitment to enlarging the military. He also appointed General Werner von Blomberg, a Reichswehr general and Nazi sympathiser, as defence minister. Blomberg would provide an important link between the government, the military and the Nazi Party.

The appointment of Hitler as chancellor and the pro-Nazi Blomberg as the defence minister made Hammerstein-Equord’s position untenable. By late 1933, he had resigned as Reichswehr commander-in-chief.

Blomberg would oversee the first phase of military expansion ordered by Hitler. He also issued directives of his own, some of which were intended to impress Hitler, such as the discharging of 74 Jewish Reichswehr soldiers on racial grounds.

As loyal as Blomberg was to Hitler, even he was greatly concerned about the growth of the SA. Enlistments for the SA skyrocketed after Hitler’s appointment as chancellor and the events of 1933. By the end of the year, membership of the SA was approaching three million.

Talk of the SA replacing the Reichswehr continued and even escalated. The SA, many said, embodied the youthful revolutionary spirit of National Socialism. “Wait until Papa Hindenburg is dead”, trumpeted one SA leader, “then the SA will march against the army”.

The SA leader, Ernst Rohm, repeatedly suggested to Hitler that he (Rohm) should replace Blomberg as defence minister. When Hitler refused these requests, Rohm became critical of the Fuhrer, both in public and private. On one occasion, Rohm caused a minor scandal by referring to Hitler as “a ridiculous corporal”.

‘Night of the Long Knives’

Attempts to ease tensions between the Reichswehr and the SA in the spring of 1934 proved unsuccessful. In June, Blomberg visited Hitler with an order from the ailing president Hindenburg. The old man wanted the situation resolved and if it could not be done, Hindenburg hinted, he may impose martial law and hand control to his generals.

This implied threat prompted Hitler to order the ‘Night of the Long Knives’, an SS-led purge that saw dozens of people arrested and killed, including Rohm and several other SA leaders.

The SA was downsized and disempowered and purged of those who wanted to lead the Nazi revolution rather than serve it. The Reichswehr leadership was placated and their confidence in Hitler bolstered.

Hitler’s influence over the Reichswehr was further enhanced with the death of Hindenburg on August 2nd 1934. He then merged the chancellorship with the presidency and became commander-in-chief of the armed forces, a move that was constitutionally illegal but endorsed by a public plebiscite (vote).

Shortly after the plebiscite, defence minister Blomberg altered the Reichswehreid, the oath of allegiance taken by all military personnel, at Hitler’s insistence. German soldiers now swore their loyalty directly to Adolf Hitler rather than the nation.

This not only bound military personnel more closely to the Nazi leader, it also made disobedience or disloyalty to Hitler a breach of the oath and a punishable offence. In March 1935, Hitler ordered a program of military expansion and the reintroduction of conscription, a move that pleased Reichswehr generals.

On May 20th 1935, Hitler formally announced the reorganisation of the defence forces: the Reichswehr was re-formed and retitled as a new Nazi-led military force called the Wehrmacht.

1. Despite being downsized at Versailles, the Reichswehr (regular army) remained an important factor in German politics.

2. Aware that the Nazi regime needed the support of the Reichswehr, Hitler began courting its generals by making promises to expand and re-equip the military.

3. The growing size and hostile rhetoric of the SA concerned Reichswehr commanders, who held a negative view of the SA rank and file but feared their military potential.

4. In mid-1934 Hitler ordered the Night of the Long Knives, in part to deal with intransigence in the SA and placate the generals of the Reichswehr.

5. With the death of Hindenburg in August 1934, the men of the Reichswehr began swearing loyalty directly to Hitler. The following year, the Reichswehr was re-formed as the Wehrmacht.

Citation information
Title: “Hitler and the Reichswehr”
Authors: Jennifer Llewellyn, Jim Southey, Steve Thompson
Publisher: Alpha History
URL: https://alphahistory.com/nazigermany/hitler-and-the-reichswehr/
Date published: July 13, 2020
Date accessed: November 14, 2022
Copyright: The content on this page may not be republished without our express permission. For more information on usage, please refer to our Terms of Use.