Heinrich Himmler was the leader of the Schutzstaffel (SS) and one of the most significant exponents of Nazi racial theory and anti-Semitism. 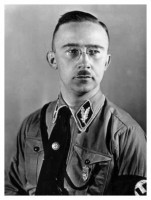 Himmler was born in 1900 to a Catholic middle-class family in southern Germany. A bright student but also a loner, Himmler was fascinated by World War I and harboured dreams of becoming an army officer, but the war finished before he was old enough to enlist.

The difficult economic conditions of the early 1920s forced Himmler to take a job in a manure-processing factory near Munich. During this period, he made contact with members of the fledgeling Nazi Party and decided to join. Himmler participated in the Munich putsch but lost interest in politics after the uprising failed.

Himmler worked briefly as a chicken farmer before returning to the party in 1925. He joined the Schutzstaffel or SS, then just a small division of the SA and under considerable pressure to disband. Himmler’s fascination with discipline, control and organisation impressed Hitler, who gave him command of the SS in 1929. This appointment surprised many in the party, who doubted the short, bespectacled, bookish clerk could keep his position or keep the SS alive.

Himmler was a ferocious worker who defied this pessimism. Not only did he ensure the survival of the SS, in time he transformed it into the NSDAP’s elite paramilitary force. He raised its profile, implemented recruiting strategies and expanded SS membership from just 300 in 1929 to 512,000 a decade later.

One of Himmler’s main aims was to separate the SS from the SA and instil it with rigorous discipline and loyalty to Hitler. He also envisioned the SS as the epitome of racial purity and Aryan supremacy.

Through the early 1930s, membership of the SS was restricted to those of Aryan stock. SS officers were required to trace their family history back three centuries, to show the absence of ‘undesirable’ racial heritage. The SS became the paramilitary showpiece of the so-called ‘master race’.

The minister of death

By the end of 1933, Himmler’s meticulous attention to detail had allowed him to become one of Adolf Hitler’s most trusted advisors. Himmler’s SS had developed into a fanatically loyal paramilitary brigade, protective of Hitler’s power rather than a threat to it. Himmler’s management of the Dachau concentration camp had also impressed Hitler, who in late 1933 gave the SS control of all such camps.

In the middle of 1934, Himmler was able to persuade Hitler to order a purge of the SA leadership (the ‘Night of the Long Knives’). This event, carried out mostly by the SS, provided Himmler with further opportunities to increase his personal power and influence.

In 1936, Heinrich Himmler was made chief of all Germany’s police forces, including the Gestapo. Later, with the onset of World War II, he had ultimate command of the Einsatzgruppen (mobile killing squads) and the network of death camps, such as Auschwitz-Birkenau, Sobibor and Treblinka.

Himmler also directed the Waffen-SS, the combat wing of the Schutzstaffel. In 1943 he was made Minister of the Interior, and in late 1944 he was given command of an army group battling American forces which had landed on D-Day. Toward the end of the war, Himmler attempted to distance himself from Hitler and negotiate a peace with the Allies. He was captured by British troops but committed suicide before he could be tried as a war criminal.

There is much historiographical debate about Himmler’s role in the rise of the Nazis, the brutality of the Nazi state and the horrors of the Final Solution.

To some historians, he was simply a desk-bound bureaucrat, meticulous and officious about carrying out Hitler’s orders. Himmler was no killer himself; one story recounts him witnessing an execution and vomiting after blood and brain matter landed on his trouser legs.

Conversely, Himmler’s twisted views about Aryan supremacy and his Jew-hatred exceeded even the wild fantasies of Hitler. There seems little doubt the SS became an instrument of racial genocide because of Himmler’s leadership. Himmler’s full understanding of the Final Solution, what it entailed and what it was intended to achieve is apparent in documents and transcripts of his speeches. In one address, given at Posen in October 1943, Himmler said:

“We have never conversed about it amongst ourselves, never spoken about it. Everyone shuddered, and everyone was clear that the next time, he would do the same thing again, if it were necessary. I am talking about the “Jewish evacuation”: the extermination of the Jewish people. It is one of those things that is easily said. “The Jewish people is being exterminated,” every Party member will tell you. “Perfectly clear, it’s part of our plans, we’re eliminating the Jews, exterminating them. Ha! A small matter.” … But all together we can say: We have carried out this most difficult task out of love for our people. And in doing so, we have taken on no defect within us, in our soul or in our character.”

A historian’s view:
“Who was the true Heinrich Himmler? The petty schoolmaster who distributes report cards to his students? The writing-desk murderer whose total balance is just short of ten million people? The man who controls millions of marks yet deducts 150 marks for a wristwatch from his pay? Is he the subordinate who can only quakingly stand before his fuhrer? The administrator who in rational terms built up an uncannily effective apparatus? The believer in occult and magic who accepted counsel and advice from clairvoyants? The moralist who is speechless at the sight of pornography on an SS leader’s desk? Or a possessed man whose self-created ‘mission’ drove him beyond the pale of humanity?”
Helmut Heiber, historian

1. Himmler was SS leader, in charge of internal security, the overseer of the Final Solution, and Hitler’s most loyal ally.

2. He had no war service, but his fascination with discipline, organisation and structure earned him favour with Hitler.

3. Himmler was given command of the SS and transformed it into an elite and racially pure paramilitary force.

4. He was also Minister of the Interior, responsible for domestic security and a key figure in the ‘Night of the Long Knives’.

5. Historians have debated his contribution to Nazism, but his role as an instigator of the Holocaust is not in dispute.