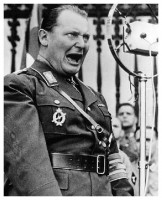 Hermann Goering was one of the highest-ranking Nazi leaders, second only to Hitler in the party hierarchy.

Goering was born into a privileged family (his father had been a colonial governor in Africa) and educated at an elite school. He enlisted in the army at the outbreak of World War I but was soon persuaded to transfer to the flying corps, then a newly-formed branch of the military.

By October 1915, the 22-year-old Goering was a qualified pilot. He served in the same unit as the famous ‘Red Baron’, Manfred von Richthofen. With 22 ‘kills’, Goering was himself considered a flying ace. But while the young pilot was something of a war hero, he was also elitist, arrogant, lazy and fond of the high life.

Toward the end of the war, Goering was given command of a fighter squadron, but he was disliked by the majority of his fellow officers. Like Hitler and other leading Nazis, Goering was surprised at Germany’s war defeat; he subscribed to the notorious ‘stab-in-the-back’ theory which attributed the German defeat to conspirators and weak politicians. On receiving orders to hand over German planes to Allied forces, Goering instead ordered they be wrecked.

Between the wars, Goering worked as a private and commercial pilot in Germany, Sweden and Denmark. In 1922, Goering settled in Munich, the heartland of Hitler’s NSDAP. He was soon drawn to the Nazi movement, its strong nationalism and virulent anti-Semitism (Goering was himself a notorious Jew-hater).

By the end of 1922, Goering had formally joined the Nazi Party. Before long, Goering’s leadership qualities and reputation as a flying ace saw him welcomed into Hitler’s inner circle.

In 1923, Hitler appointed Goering as commander of the Sturmabteilung (SA). He made important changes that started the transformation of the SA from a disorganised rabble into a paramilitary force.

Goering also marched alongside Hitler in the Munich putsch of November 1923. Goering was injured during the putsch, shot in the groin. This injury became infected and caused him considerable pain for the rest of his life.

Through the mid-1920s, Goering lived in exile in Austria; there he suffered a mental breakdown, caused by his isolation, his injuries and his ongoing addiction to morphine.

By 1928, Goering had returned to Germany and was elected to the Reichstag as an NSDAP candidate. When the Nazis became the largest party in the legislature in 1932, Goering was elected as Reichstag president. On Hitler’s appointment as chancellor in January 1933, Goering was chosen to join him in the cabinet as ‘minister without portfolio’.

As Hitler extended his control over Germany in the spring of 1933, Goering assisted with the creation of a police state. He was appointed as governor of Prussia, which gave him command of Prussia’s powerful police units. Goering replaced the Prussian leadership with Nazi commanders, then detached several units to form the Gestapo, the notorious Nazi secret police.

As well as being in charge of early domestic security, Goering also held important military and economic positions. In 1933, he became Reich minister of aviation and commander of the newly-formed Luftwaffe (Nazi air force), positions he would hold until the end of World War II.

In 1936, Goering was given oversight of Hitler’s four-year economic plan to modernise and re-arm Germany. Most of the programs Goering led were successful, which earned him Hitler’s trust. During the first days of World War II, Hitler formally anointed Goering as his successor. In 1940, Goering was given the special rank of Reichsmarschall, making him the highest commissioned military officer in Nazi Germany and subordinate only to Hitler.

Though Goering was faithful to Hitler, he was also independent-minded and less inclined to the same blind loyalty practised by Himmler, Goebbels and others. His views often differed from Hitler’s, especially with regard to foreign policy.

Goering did not consider Germany ready for war in 1939; he believed it would take at least three years for German naval and air strength to surpass that of Britain. Goering was also opposed to invading Poland or the Soviet Union; he thought the Nazis could infiltrate, coerce and eventually dominate eastern Europe without excessive military action.

Goering favoured recapturing Germany’s foreign colonies, while Hitler viewed lebensraum and European territory as greater priorities. Regardless of these differences of opinion, Goering was nevertheless committed to obeying Hitler’s orders.

Goering was also known for his extravagant lifestyle. He owned several houses and estates, held decadent parties, acted as an operatic patron and collected countless items of fine art and sculpture. Much of this was funded by his exorbitant government salaries, however, Goering also received millions of Reichmarks in bribes, kickbacks and confiscated Jewish property.

Despite his excessive weight, Goering was fond of showy uniforms and over-the-top clothing: it was not unusual to see him wearing a medieval costume, huge fur coats or Roman togas.

Naturally the common people don’t want war. But after all, it is the leaders of a country who determine the policy, and it’s always a simple matter to drag people along, whether it is a democracy or a fascist dictatorship, or a parliament, or a communist dictatorship. Voice or no voice, the people can always be brought to the bidding of the leaders. This is easy. All you have to do is tell them they are being attacked, and denounce the pacifists for lack of patriotism, for exposing the country to danger. It works the same in every country.
Hermann Goering, 1946

1. Hermann Goering was born and raised in a privileged family. He became a successful fighter pilot in World War I.

2. He joined the Nazis in 1922, was admitted into Hitler’s inner circle and marched alongside him in the Munich putsch.

3. In 1928 Goering was elected to the Reichstag, later becoming its president. He joined Hitler’s ministry in January 1933.

4. Goering was later appointed the commander of the air force, then oversaw economic recovery and re-armament.

5. He did not always agree with Hitler’s foreign policies but nevertheless obeyed the Fuhrer’s directives without question.