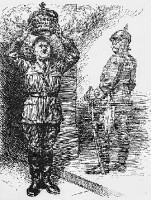 The Reichstag fire and passing of the Enabling Act gave Adolf Hitler and the National Socialists (NSDAP) wide-ranging emergency powers. They used this power to extend Nazi control across the German nation, disempowering or dissolving government assemblies or agencies.

On March 5th 1933, just a week after the Reichstag building in Berlin had been devastated by fire, Germany held its third federal election in just nine months.

This election was neither free nor fair but was instead corrupted by the brown-shirted Sturmabteilung. SA troopers openly interfered in both campaigns and voting, threatening party organisers, breaking up left-wing meetings, tearing down opposition posters and spreading scurrilous rumours about candidates.

The pro-Nazi press also whipped up hysteria by publishing rumours of an imminent communist revolution.

These rumours, coupled with Hitler’s decisive response to the Reichstag fire, led many Germans to abandon other parties and vote for the NSDAP. The Nazis increased their share of the vote to almost 44 per cent and won a further 92 Reichstag seats, giving them 288 out of 647 seats.

The NSDAP’s tally of 288 seats was the most won by any single party in the Weimar Reichstag – but it was still not a simple majority, let alone the two-thirds majority Hitler needed to amend the Weimar constitution.

Despite this, the Nazi leader was able to configure a majority by arresting communist and social democratic politicians and striking a deal with the Catholic-dominated Centre Party, whose members feared the prospect of a communist revolution.

On March 23rd, the Reichstag passed the Enabling Act, granting Hitler political powers not available to a German ruler since the days of Bismarck.

With the Enabling Act giving him extensive emergency powers, Hitler set about expanding Nazi control and transforming Germany into an authoritarian one-party state.

One of their first political targets were the Landtags (German state parliaments). In March, Hitler ordered that the head of each Landtag must be an NSDAP member. The following month, he appointed Nazi Reichsstatthalters (governors) in each of the states. Like Hitler, these governors had the power to bypass the local assembly and rule by decree.

The states were now under Nazi control and their parliaments were as impotent as the federal Reichstag. In January 1934, the Landtags were dissolved and their sovereign powers were surrendered to the national government. The Nazis also moved on local governments and city councils, relieving these bodies of their control over civilian police.

On April 26th 1934, the NSDAP reorganised German local government into 32 Gaus (shires). Each Gau was run by a Gauleiter, a high-ranking Nazi official appointed by the party. By mid-1934, the Nazis controlled almost all sectors of German political life.

Next, Hitler and his followers focused on their political opponents. First in their sights were the trade unions, which were perceived as a harbour for communist ideas.

On May 2nd – ironically, the day after Labour Day – SA troops stormed trade union buildings and arrested key union leaders, mostly on trumped-up charges of corruption. Many ended up in the Dachau concentration camp, opened just weeks before.

A Nazi decree abolished all existing trade unions and outlawed the formation of new unions. On May 10th 1933 a new state-run union, the Deutsche Arbeitsfront (the DAF, or German Labour Front) was established.

Next came the formation of a one-party state. Between March and July 1933, most of Germany’s political parties were pressured to either merge with the NSDAP or ‘wind up’ voluntarily.

Some, like the Catholic-led Centre Party, chose the latter option. The Social Democratic Party (SPD) refused, so in June it was declared a criminal organisation and outlawed.

Hitler dealt with the remaining political parties in a decree dated July 14th 1933:

“The National Socialist German Workers’ Party constitutes the only political party in Germany … Whoever undertakes to maintain the organisation of another political party or to form a new political party shall be punished with penal servitude of up to three years or with imprisonment of between six months and three years, unless the act is subject to a heavier penalty under other regulations.”

Outlawing other parties did not eradicate political opposition, of course – but the Nazis had taken steps to deal with troublesome groups and individuals.

Earlier in 1933, Hitler authorised the construction of concentration camps at Oranienburg, near Berlin, and Dachau, near Munich. Operated by the Schutzstaffel or SS, these camps were conceived as secure holding facilities for political prisoners.

Communists and trade union leaders were among the first to be arrested and detained in these camps. Later, they were also used to house other political dissidents, anti-Nazi campaigners and priests – as well as ‘undesirables’ like homosexuals, criminals, pacifists, vagrants and Jehovah’s Witnesses.

The concentration camps were brutal places where inmates were subject to military-style discipline and hard labour. There were hundreds of deaths from exhaustion, malnutrition and incidental violence, though there were as yet no intentional extermination facilities. By 1939, both Dachau and Oranienburg held about 25,000 prisoners.

Hitler’s political supremacy was now constrained by just one institution: the presidency.

In real terms, the ageing Paul von Hindenburg was no problem. Hindenburg had approved the Reichstag Fire Decree and Enabling Act without objection, nor did he interfere in Hitler’s political reforms of 1933 (other than complaining about the treatment of Jewish World War I veterans).

Nevertheless, Hitler viewed Hindenburg as a redundant figure from a bygone era. He continued to show respect and deference to the old man – in public at least – to avoid offending the Reichswehr, a group whose support Hitler needed.

Hitler was also aware that Hindenburg was suffering from terminal lung cancer. This eventually claimed his life on August 2nd 1934, removing the last vestige of the Weimar political system and clearing the way for Hitler’s political supremacy.

From Chancellor to Fuhrer

Shortly after Hindenburg’s death, Hitler merged the presidency and chancellorship into a new office. The new leader would be titled as the Fuhrer (‘leader’) and would act as head of state, head of government and commander of the armed forces.

Hitler convened a plebiscite (vote) to obtain public endorsement of this constitutional change. Almost nine-tenths of Germans approved of the measure, though there was some suggestion the plebiscite was rigged.

Hitler was now Fuhrer of all Germany and his rise – from obscure Bavarian radical to absolute dictator of the German nation – was now complete.

“From the beginning, the Hitler government seemed to possess a dynamism and force that contrasted sharply with the paralysis of previous administrations. The vitality of the regime was reflected in the reporting style not particularly well-disposed to Nazism… a growing feeling stretching beyond existing Nazi support, that the turning point had been reached, that something at least was now being done.”
Ian Kershaw, historian

1. The Enabling Act, passed in March 1933 after the Reichstag fire and national election. gave Hitler powers to impose Nazi control over German government and society.

2. In April 1933, Hitler began reducing the power of Landtags (state assemblies) by appointing Nazi governors. The Landtags were abolished the following year.

3. Local government was also reorganised under Nazi control, with police powers passing to the SS and the Gestapo.

4. Trade unions and political parties were dissolved and outlawed in mid-1933, while political opponents and dissidents sent to newly constructed concentration camps.

5. On the death of Hindenburg, Hitler merged the presidency and chancellorship and proclaimed himself the supreme leader.