Marquis de Lafayette (1757-1834) was a liberal aristocrat, military leader and politician, and arguably the most influential leader of the French Revolution’s moderate phase (1789-91). 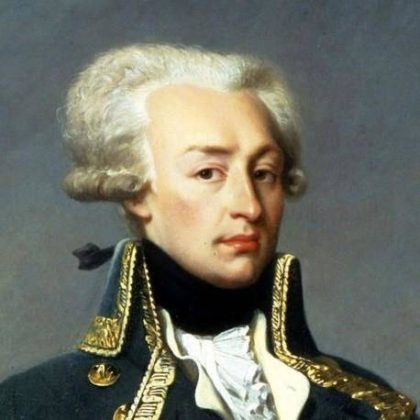 Born Gilbert du Motier in south-central France, Lafayette was of noble blood and voraciously ambitious. As a younger son, he was destined for a career in the army.

Role in the American Revolution

In 1777, du Motier defied the government and travelled to North America, where he planned to assist the American revolutionaries in their struggle for independence. While in America, Lafayette proved himself a skilled military officer, earning the respect and friendship of George Washington. Lafayette was hailed as a hero after returning to France. By the 1780s, he had become one of the most famous Frenchmen in the world.

Du Motier returned to France changed and inspired by the American Revolution; he was enamoured with its successes, its political idealism and its moderate aims. At the outbreak of the French Revolution, he was barely into his 30s, yet was already being hailed as a leader of men.

In 1787, Lafayette was appointed to the Assembly of Notables; in his position, he argued for the convocation of the Estates-General, where he also served as a deputy for the Second Estate.

A historian’s view:
“The electors declared Paris an autonomous commune and voted Lafayette commanding general and military head of the new government. Elated by the prospects of organising and commanding an American-style citizen’s milita, he drew his sword, the symbol of his knighthood and fealty to the king, and raised it high to thunderous cheers… ‘Vive le Roi!’ he cried. ‘Vive le Roi! Vive la Nation!’ they echoed, before beginning a sing-song chant: ‘La-fa-yette, La-fa-yette…’ One elector crowned the Houdon bust of Lafayette with a laurel wreath, then held it high above his head and marched it around the room.”
Harlow G. Unger

Lafayette’s personal views were liberal and moderate. He was a student of the Enlightenment philosophes and hoped for relatively peaceful transition into constitutionalism, in a similar fashion to the American Revolution. In 1789 and 1790, he was possibly the only figure who could have saved the French Revolution – in fact for many people, Lafayette was the revolution.

The growing radicalism in Paris was always a concern to Lafayette, however, and his command of the National Guard placed him in the awkward centre of several revolutionary events. In October 1789, he attended Versailles to protect the king and his family from a possible mob attack, then accompanied the royal family back to Paris. In February 1791, Lafayette and his National Guard intervened in a standoff between armed nobles and a Paris mob, an event later dubbed the ‘Day of Daggers’. Fed up with increasing tensions and violence in the capital, Lafayette tried to resign but was talked out of it.

In July 1791, Lafayette ordered the National Guard to open fire on a rowdy republican mob at the Champ de Mars, killing more than 50 people. This incident shattered whatever respect and affection he still enjoyed among the radical Jacobins and urban sans culottes. By mid-1792, Lafayette was serving in the regular French military but also urged the government to take strong action against radical political clubs.

As the revolution radicalised further, Lafayette planned to use his army to protect the royal family and to push for a limited monarchy. His last move was an unsuccessful attempt to rally troops to march on Paris after the dramatic journee of August 10th 1792. This prompted the government to declare him a traitor, while Lafayette himself began to think the revolution had been lost.

In late August, Lafayette left French territory and surrendered himself to the Prussians and Austrians. The Austrians held him in detention until 1797. He later returned to France and served in the post-Napoleonic national government.

Citation information
Title: “Marquis de Lafayette”
Authors: John Rae, Steve Thompson
Publisher: Alpha History
URL: https://alphahistory.com/frenchrevolution/marquis-lafayette/
Date published: May 9, 2017
Date accessed: January 25, 2023
Copyright: The content on this page may not be republished without our express permission. For more information on usage, please refer to our Terms of Use.