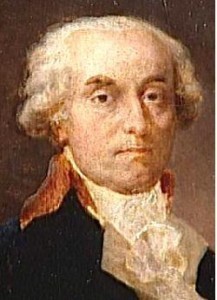 Jerome Pétion de Villeneuve (1756-1794) was a writer and politician. He was best known for serving as the second mayor of Paris between November 1791 and October 1792.

The son of a Chartres public official, the young Pétion worked as both a writer and a lawyer, enjoying little success with either. The unfolding revolution saw his writing become more radical, though whether Pétion’s radicalism was sincere or just an expedient route for advancement is uncertain.

He represented the Third Estate at the Estates General and in October 1790 was elected president of the National Constituent Assembly. Pétion also escorted the detained Louis XVI back to Paris from Varennes in June 1791, earning him public acclaim.

As Paris’ second mayor, Pétion proved more radical than his predecessor Bailly, calling for the removal of the king. As mayor and a popular figure with Paris’ sans culottes, Pétion did little to invent mob invasions of the Tuileries in June and August 1792.

Forced out as mayor after the September Massacres, Pétion sat in the National Convention and aligned with the Girondin faction.

An opponent of Maximilien Robespierre, he sat for a time on the Committee of Public Safety but was expelled from the Convention in June 1793.

After this, he fled to Normandy and attempted unsuccessfully to initiate an anti-Jacobin uprising. Pétion committed suicide in June 1794.

Citation information
Title: “Jerome Pétion”
Authors: Jennifer Llewellyn, Steve Thompson
Publisher: Alpha History
URL: https://alphahistory.com/frenchrevolution/jerome-pétion/
Date published: May 22, 2017
Date accessed: December 02, 2021
Copyright: The content on this page may not be republished without our express permission. For more information on usage, please refer to our Terms of Use.