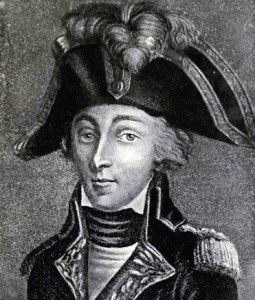 Born in Paris to a family of servants, Hanriot’s early life was unremarkable and miserable: he attempted many jobs, failed at most of them and was usually penniless.

In the early 1790s, Hanriot found a measure of fame as a tub-thumping public speaker in the Paris sections, where he railed against the monarchy, the aristocracy and moderates in the National Assembly. Hanriot was reportedly involved in several mob actions around the city, including the 1791 protests at Champ de Mars, the 1792 storming of the Tuileries and the September Massacres.

In 1792, Hanriot joined the newly republicanised National Guard, rising to the rank of captain. In May the following year, he was given command of the entire Paris division of the Guard, a position of considerable influence.

Weeks after taking up this post, Hanriot led his men to the National Convention and demanded the expulsion and arrest of the Girondin deputies. He became a notable supporter of Jean-Paul Marat and then Maximilien Robespierre.

Hanriot was arrested and guillotined in July 1794. According to one account, he tried to avoid the guillotine and commit suicide by leaping from a window, only to land in a pile of horse manure.

Citation information
Title: “Francois Hanriot”
Authors: Jennifer Llewellyn, Steve Thompson
Publisher: Alpha History
URL: https://alphahistory.com/frenchrevolution/francois-hanriot/
Date published: May 29, 2017
Date accessed: July 03, 2022
Copyright: The content on this page may not be republished without our express permission. For more information on usage, please refer to our Terms of Use.