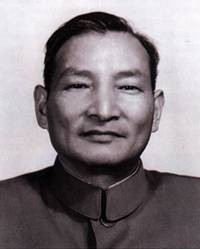 Chen Yun (1905-95) was a revolutionary, politician and economic planner who held several important positions within the Chinese Communist Party (CCP) and the national government.

Chen was born near Shanghai in 1905. He received a rudimentary education before gaining work with a printing firm. Chen soon became involved in the union movement, joined the CCP (1925) and studied in Moscow (1927).

In 1934, Chen was elected to the CCP Central Committee and participated in the Long March. Chen joined the Politburo in 1940. By this point, his economic prowess was well known in the party, which led to Chen being given responsibility for industrial and infrastructure projects. During the 1950s, he oversaw the First Five Year Plan (1953-57) and the acquisition and distribution of Soviet aid.

An economic realist who opposed radical or ambitious change, Chen did not support Mao Zedong‘s Great Leap Forward. He voiced criticisms of the policy in early 1959, calling for the government to accept Soviet food aid and suggesting that economic targets be revised.

Unlike his fellow critic, Peng Dehuai, Chen escaped Mao’s retribution at Lushan, retaining his place in the party hierarchy. Between 1960 and 1962, he acted as an economic advisor to Liu Shaoqi and Deng Xiaoping as they attempted to reform the economy.

Chen was attacked as a ‘bourgeois moderate’ during the Cultural Revolution, though not as vehemently as Liu Shaoqi and others. He was purged from the party and spent several years in isolation, including three years working in an industrial factory in Jiangxi province.

Chen was rehabilitated by Deng Xiaoping after Mao’s death and returned to prominent advisory roles in the government. He retired in 1992 and died three years later.