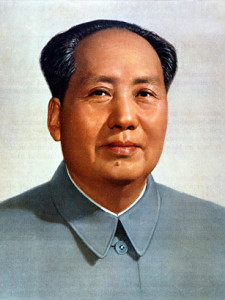 Mao Zedong (1893-1976, Wade-Giles: Mao Tse-tung) was a Chinese communist, military commander, strategist, political philosopher and party leader. He became the most significant leader and figurehead of the Chinese Revolution.

Rising from humble origins, Mao was a minor regional figure in the Chinese Communist Party (CCP) until the 1930s. During the Long March (1934-36) and the Yan’an period (1936-46), Mao became the undisputed leader of the party, as well as its leading strategist and ideological mentor.

It was Mao Zedong who addressed a crowded in Tiananmen Square, Beijing in October 1949, to decare the CCP’s final victory and the formation of the People’s Republic of China.

Mao is perhaps best known as the architect of the Great Leap Forward (1958-61), an ambitious but disastrous economic program that produced a widespread national famine in China, causing the deaths of an estimated 30 million people. Mao was also the figurehead of the Cultural Revolution (1966-76), a disruptive and sometimes violent mass campaign driven by political radicals.

Mao Zedong was born in Hunan province, the son of an affluent peasant. He began his life as a librarian and teacher while studying both left-wing Western political texts and the writings of ancient Chinese scholars.

In 1921, Mao became a founding member of the CCP, attending the first meeting of the party in Shanghai. For much of the 1920s, he worked as a party functionary in Shanghai and as a regional leader in his native Hunan.

In 1927, Mao led the Autumn Harvest Uprising, an unsuccessful rebellion against Nationalists and landlords in Hunan province. In 1929, he instigated the formation of a ‘peasant soviet’ in the southern province of Jiangxi. Despite his successes there, Mao was elbowed from power in Jiangxi after the party’s national leaders relocated there in 1931.

An encirclement campaign by the Nationalists forced the CCP and the Red Army to abandon Jiangxi in 1934, triggering the famous Long March. This event would raise Mao’s profile, allowing to gain control of the CCP and change the course of the Chinese Revolution.

Mao’s leadership during the Long March (1934-35) and the Yan’an Soviet (1936-1949), coupled with a power shift at the Zunyi conference (1935), increased his prominence and support in the CCP. By the mid-1940s, Mao had become the party’s political, military and ideological leader. This ascendancy was not bloodless or painless. Mao’s rectification campaign in Yan’an was designed, in part, to intimidate, marginalise and eradicate his opponents.

While based in Yan’an, Mao worked on developing and refining his own political philosophy. His political writings, later dubbed Maoism or ‘Mao Zedong Thought’. would become the official ideology of the CCP. In 1949, Mao led the communists to victory in the Chinese Civil War and proclaimed the formation of the People’s Republic of China.

Mao’s policies in the early 1950s began China’s transition from an undeveloped agricultural economy into an industrial and military superpower. His agrarian reform program began with peasants seizing land from landlords, many of whom were punished for their exploitation of others.

In the mid-1950s, Mao implemented a Soviet-style economic program, the First Five Year Plan, and set about collectivising peasant land into huge communes. In 1958, Mao launched his second Five Year Plan, dubbed the Great Leap Forward, demanding that China’s heavy industries and steel production grow to exceed that of Western nations. Mao’s ambitious plans did produce industrial growth but it came at an enormous human cost.

By 1959, some of Mao’s fellow party leaders were criticising the Great Leap Forward and urging a more moderate approach. Mao resigned the presidency of the People’s Republic (April 1959) and in the early 1960s reluctantly stepped back from matters of government and policy.

Cultural Revolution and return to power

In the mid-1960s Mao launched the Cultural Revolution, a movement to identify and cleanse anti-socialist ideas in academia, art and literature. The Cultural Revolution became a sweeping social and political movement, underpinned by one of the strongest personality cults in history. It was driven by political radicals, most of them students fanatically loyal to Mao, his ideas and his socialist vision.

As an international leader, Mao was famously hostile to Western nations, particularly the United States, which he described as a nation of “hangmen”. Mao generally left foreign policy matters to his premier, Zhou Enlai, though he did meet US president Richard Nixon during the latter’s 1972 visit to China.

The final years of Mao’s reign were marked by illness and incapacity. Socialist policy during this period was strongly influenced by the Gang of Four. When Mao died in September 1976, it triggered a tidal wave of grief and sorrow around China.

This Chinese Revolution website is created and maintained by Alpha History. It contains 187,988 words in 270 pages. This site was last updated on December 27, 2022. For more info, visit Alpha History or our Terms of Use.