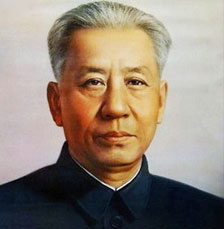 Liu Shaoqi (Wade-Giles: Liu Shao-chi) was an important communist leader who served as vice-president of the Chinese Communist Party (CCP) and president of the People’s Republic of China. An economic moderate whose views contradicted those of Mao Zedong, Liu was later expelled from the party and targeted by Mao’s fanatical supporters.

Like Mao, Liu Shaoqi was born into a family of affluent peasants in Hunan province. He joined the CCP in its early stages and studied in Russia, before returning to China in 1922 and working as a labour activist.

Liu was elected to the CCP’s Central Committee in 1927. He participated in the first stages of the Long March and supported Mao at the Zunyi conference. Liu became a notable figure in Yan’an and a prolific writer, penning the popular text How to be a good Communist in 1939.

Liu’s activities and support for Mao saw him rise in the ranks of the CCP. By the late 1940s, he held a number of important party and military command positions.

After the CCP victory in 1949, Liu organised and oversaw the implementation of a Soviet economic model, which he considered the best option for modernising China.

At various times, Liu held seats in most important government and party bodies including the Politburo, the Politburo Standing Committee and the National People’s Congress.

When Mao floated the Great Leap Forward in 1958, Liu gave it his full support.

By the CCP’s August 1959 plenum in Lushan, Liu had become more sceptical. After hearing stories of peasant famines from his sister, Liu became more critical of Mao within party ranks.

This growing disenchantment with economic conditions eventually led to Mao’s discrediting and his 1959 resignation as president of the People’s Republic.

Liu, whose own popularity was growing as Mao’s was waning, replaced him, becoming the nation’s second president-chairman.

With Mao sidelined, Liu and his fellow moderate Deng Xiaoping joined forces to develop and initiate economic reforms. These policies allowed China to slowly recover through the 1960s.

Liu’s attempts to save China from an economic disaster would later be thanked with public humiliation, expulsion and torturous death. In 1966, Mao and his followers initiated the Cultural Revolution. Liu Shaoqi would become its most significant victim.

Liu, Deng Xiaoping and dozens of others were denounced as ‘Rightists’ or ‘capitalist roaders’ who had betrayed Chinese socialism. Mao’s Red Guards launched a propaganda campaign against Liu, one 1968 poster declaring that “The traitor and scab Liu Shaoqi must be forever expelled from the party!”.

With the CCP hierarchy disrupted by the Cultural Revolution, Liu Shaoqi quickly lost support within the party.

In 1966, Liu was removed from his position as CCP deputy chairman. Two years later, he was dumped as president of the Republic and expelled from the CCP. He vanished soon after, apparently held in solitary confinement and subject to regular beatings.

Though evidence is sketchy, it appears Liu suffered a lingering death in late 1969, probably from mistreatment and denial of medical attention. The Chinese people did not learn of the passing of their former president until a decade later.

“Liu’s life may be viewed as an attempt to combine order with revolution, and equality with economic efficiency… Over a period of more than a quarter-century, he served as a constructive and stabilising force within the party and the regime. Unlike most Chinese Communist leaders, who tended to distinguish themselves in some particular endeavour… Liu had experience in numerous aspects of the movement – trade unions, guerrilla bases, underground movements, mass movements – but in all of these fields he exhibited the same fundamental concern.”
Lowell Dittmer